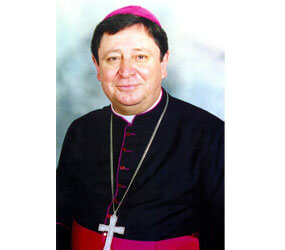 VATICAN CITY – The Brazilian archbishop who now heads the congregation for religious said he almost abandoned the seminary and the Catholic Church because of the ideological excesses that emerged in the early years of liberation theology.

“Personally, I lived with a lot of anguish during the years of the birth of liberation theology,” Archbishop Joao Braz de Aviz said in an interview with the Vatican newspaper, L’Osservatore Romano, Feb. 2.

In January, Pope Benedict XVI appointed the former archbishop of Brasilia to head the Congregation for Institutes of Consecrated Life and Societies of Apostolic Life.

The 63-year-old archbishop said he was studying theology in Rome when the liberation theology movement was building in Latin America, and it was at that time that “I came very close to abandoning my priestly vocation and even the church.”

But a strong relationship with the Focolare movement and a dedication to its spirituality of unity “saved me,” he said.

Archbishop Braz de Aviz said he appreciated that liberation theology promoted the preferential option for the poor, which represents “the church’s sincere and responsible concern for the vast phenomenon of social exclusion.”

But while liberation theology, which saw a strong tie between the spiritual liberation from sin and the need for temporal liberation from poverty and social ills, had positive elements, there were tendencies that needed correction, he said.

The Congregation for the Doctrine of the Faith prepared two documents in the 1980s “correcting issues linked to using the Marxist method in the interpretation of reality,” he said. Christians must understand the option for the poor as a religious obligation and not part of an ideology, he said.

The prefect of the congregation overseeing religious life in the Catholic Church said that when he was picked for the post, he was concerned that his not being a member of a religious order would somehow be a detriment.

But Cardinal Tarcisio Bertone, the Vatican’s secretary of state, told him “it didn’t cause any problems.” He said his experience with the Focolare movement from the time he was 17 brought him into close contact with many members of religious orders and congregations.

Part of the problem behind a lack of vocations in religious life, he said, is because “the influence of today’s individualism and relativism has reached, at least in part, even some areas of consecrated life, diminishing its vigor.”

“The lack of a theological and mystical experience of the Holy Trinity as the source of communion has brought negative statements about community life,” such as when some religious say the biggest penance they face is communal living, he said.

The archbishop said consecrated men and women need to explore more deeply the mystery of God to strengthen their relationships with others.

By truly understanding that God is love and that all people are created in his image, men and women living in a religious community will be better able to see those they live with as an opportunity to experience God and to experience love, he said.

When asked about the problem of misunderstandings between religious congregations and local bishops, Archbishop Braz de Aviz said, “When autonomy and dependence became experiences of love, then obedience and authority reach a balance and foster great inner joy.”