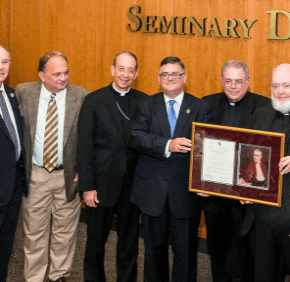 Father Michael J. Roach is among the likely very few who claim not to have been surprised by Pope Benedict XVI’s Feb. 11announcment of his resignation at the end of the month.

“Pope Benedict is a brilliant and wise man, and he spoke of this earlier – that if his health ever really declined, he would be one to resign, and he fulfilled that,” he said. “I trust his judgment completely, because he is such an extraordinarily gifted man.”

Father Roach, pastor of St. Bartholomew in Manchester and adjunct professor of church history at Mount St. Mary’s Seminary in Emmitsburg, said other popes have made the same decision for various reasons. Catholic News Service estimates there have been 10 other papal resignations.

“It was done in the Middle Ages on occasion to settle a squabble or to make situation better, or because a pope couldn’t stand the fray anymore and wanted to go into holy retirement,” Father Roach said.

It has been 600 years the last papal resignation, and then it was not so willing.

Cardinals elected Pope Gregory XII in 1406 intending for him to abdicate the seat. The Catholic Church was in schism, with two papacies – one in Rome and one in Avignon, in present-day France.

Before the election in Rome, all cardinals swore that, if elected, they would resign, as long as Benedict XIII in Avignon would as well. Then, they hoped, a single conclave could be held, electing a new pope and resolving the schism.

The plan failed, and a third pope – Alexander V – was elected, but Gregory and Benedict still claimed rights to the seat. Gregory eventually resigned in 1415, and died two years later, the same year the 40-year schism ended.

Other notable papal resignations include that of St. Celestine V, who served only five months in 1294, and is considered the only pope besides Benedict XVI to resign freely. He was canonized in 1313.

No pope has taken Celestine’s name since, but Pope Benedict has turned public attention to him more than once.

On the 800th anniversary of Celestine’s birth, Pope Benedict proclaimed a “Celestine year” from August 2009 to August 2010.

He also visited the saint’s remains in L’Aquila, Italy, while inspecting damage from the 2009 earthquake that toppled the city. He left the pallium he wore during his papal installation at the site as a gift.

In 2010, he visited Celestine’s relics in the saint’s hometown, Sulmona, Italy. There he praised Celestine’s inner silence “to perceive the voice of God, which guided his life,” according to a Catholic News Service report.

Although there is historical precedence for Pope Benedict’s decision, there are many unknowns in how the process will take place, and what life would look like for a former pontiff.

“This man is so extraordinarily brilliant, a man who thinks outside the box,” Father Roach said. “I’m sorry that he has found himself in such decline that he has to do this, but I respect his judgment, his decision, as I do in so many things.”

Pope Benedict’s eight year reign has been a “great gift to the church,” he said, adding that Pope Benedict and his predecessor Pope John Paul II “have been a great complement to each other.”

“John Paul was the philosopher and Benedict was the theologian. Their writings are very different for men who always thought with the church,” he said. “Benedict has that great German gift of clarity in his writing.”

The present pope will leave a legacy in liturgy and Christian unity, Father Roach said.

“He was always very clear in stating his thoughts that some things in the liturgy had taken a wrong turn, and he wanted to reform the reform,” he said.

Pope Benedict eased restrictions on the Tridentine rite Mass with the 2011 apostolic letter “Summorum Pontificum,” and envisioned the Mass’ ordinary and extraordinary forms unifying in a common rite, according to advisors.

In 2011 and 2012, Pope Benedict established the Personal Ordinariate of the Chair of St. Peter in Britain and the United States as a means for former Anglicans and Episcopalians to join the Catholic Church while retaining some prayers and customs of the Church of England.

The personal ordinariate has had a particular impact on the Archdiocese of Baltimore, where the members of three formerly Anglican parishes and one convent have come into communion with the Catholic Church.

“Each pope brings a different flavor, a slightly different direction, a different emphasis to his reign,” Father Roach said.

“It will be interesting to see who this (the next pope) is,” he added. “I certainly don’t foresee any radical change.”

Benedict will be prayerful presence in next papacy