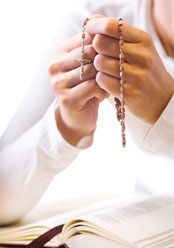 For many years, James Ulmer has given something up for Lent. Whether it was candy, soda, alcohol or chocolate, the 56-year-old parishioner of St. Katharine Drexel in Frederick always made it through the traditional 40-day penitential season without reneging on his sacrificial pledges – although he admitted that going without chocolate “almost killed” him.

This year, Mr. Ulmer is trying something different. He plans to contact six people he’s hurt in some way and ask their forgiveness.

“It’s going to be very challenging,” said Mr. Ulmer. “I’m excited about it. I think it’s going to be healing for all of us. This is much more rewarding for me and the people I’m going to spend time with.”

Mr. Ulmer is one of many Catholics throughout the Archdiocese of Baltimore who have committed themselves to extra prayer, almsgiving, works of mercy or Christian service this Lent. Many others have maintained the tradition of giving up something special as a way to focus on the real meaning of Lent and deepen their spirituality.

“Fasting is not just about giving things up or not eating as much,” said Father Michael Carrion, pastor of Immaculate Heart of Mary in Baynesville. “It’s having an awareness that not everything is about us. Our fasting is one way to give thanks to God for the many things we do have.”

Lent reminds Christians of their obligation to reach out to others, Father Carrion said. It’s also a time to seek forgiveness.

“It’s about looking at ourselves and making changes,” he said. “What do we need to change to grow closer to the Lord?”

Matthew Colket, a 12-year-old seventh-grader at St. John Regional Catholic School in Frederick, is saying extra prayers this Lent. Every day, he is praying a novena to St. Therese de Lisieux – his mother’s favorite saint. He’s also pledged to give up junk food and limit himself to just three meals a day with no snacking.

“I think it’s important to remind yourself of Jesus’ journey through the desert and how he fasted,” said Matthew, a parishioner of St. John the Evangelist in Frederick. “Jesus was tempted, but he turned away from the temptation.”

Emily Kinley, a 13-year-old eighth grader at St. John Regional Catholic School in Frederick, has given up spending a lot of time on the computer. She’s planning to use the computer just 15 minutes a day.

“I like to talk to friends and play games online,” said the parishioner of St. John the Evangelist, Frederick. “I’m going to spend that time with my family and pray.”

Emily is planning to pray the rosary throughout Lent.

“It’s important so I can be closer to God,” she said.

Contemplating Christ’s suffering and death is an important component of Lent, she said.

“Without the resurrection, we wouldn’t be saved from our sins,” she said.

Lent wouldn’t be meaningful without a sense of sacrifice, according to Mike Guidara, a 56-year-old parishioner of Our Lady of Perpetual Help, Ellicott City. In addition to abstaining from meat on Fridays, Mr. Guidara is planning to abstain from meat on the Saturdays and Sundays of Lent. He also plans to pray the Stations of the Cross at the National Shrine Grotto of Lourdes in Emmitsburg and watch Mel Gibson’s “The Passion of the Christ.”

“When you think about what Christ did for us by dying on the cross, it’s the least I can do,” said Mr. Guidara. “We can’t just be all talk and no action.”

Bridget Bindel, a 16-year-old parishioner of St. Ursula in Parkville and a junior at the Institute of Notre Dame in Baltimore, is giving up soda this Lent. She is also planning to attend all the liturgies of Holy Week.

“It’s important to realize we have a lot and we can give some things up,” said Bridget, noting that many of her friends have also given up soda or ice cream.

Sixty-two seventh-graders at Notre Dame Preparatory School in Towson are donating ice cream money or forgoing treats like cookies to collect money to purchase items to fill 60 baskets for the children with developmental disabilities at Villa Maria, Timonium.

Children at Monsignor Slade Catholic School in Glen Burnie are doing a similar Lenten project, raising money for Alzheimer’s, AIDS and breast cancer research, according to Lydia Ramsey, a 14-year-old eighth-grader and student council president. During Lent, Lydia said she’s making the personal sacrifice of giving up nail biting and she said she’s going to do her schoolwork as soon as it’s assigned.