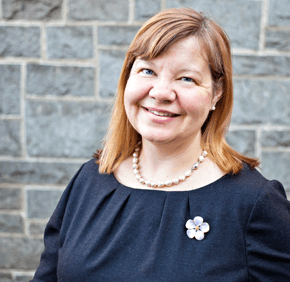 By Paul McMullen
pmcmullen@CatholicReview.org
Since 2007, Mary Beth Lennon has helped the Jesuits expose high-schoolers to opportunities beyond inner-city Baltimore.
When Lennon was a college undergrad, the School Sisters of Notre Dame took her to Guatemala and expanded her world view.
Lennon’s global awareness, however, began with the Religious Sisters of Mercy, whose ranks include her maternal aunt, Sister M. Ambrose Fitzgerald, in residence in a convent in Galway, in her native Ireland.
The institutions the RSMs have graced include the parish school at St. Joseph, Cockeysville, where Lennon began her formal education, and Baltimore’s Mercy High School, where 30 years ago, Christian Citizenship, her junior year religion class, informed Lennon about the sociopolitical crisis in Central America, how its disenfranchised came to be.
Lennon was back at Mercy High the morning of Oct. 29, when she was introduced as its next president. A member of its Class of 1985, Lennon, 46, will become the first alumna to hold the position, effective July 1.
“Mercy High transformed me, as a learner and as a leader,” Lennon told the Catholic Review beforehand. “It’s where I became an independent learner, learned how to manage my time, how to delve into a subject in great depth.”
Lennon’s accomplishment of seemingly daunting tasks impressed the Mercy board of trustees, who unanimously approved her appointment, and the faculty of the all-girls school, whom she met in late August.
“Her start-up experience brings a unique perspective,” said Pegeen M. D’Agostino, the principal of Mercy who has served as its interim president since the June 30 retirement of Religious Sister of Mercy Carol E. Wheeler. “Mary Beth was at the ground level of a big dream.”
In 2007, Lennon was among the first hires at Cristo Rey Jesuit High School in Fells Point, where dozens of Baltimore businesses and institutions give students valuable work experience and tuition stipends through its Corporate Internship Program.
The director of communications and assistant to the president, Lennon did everything from designing the school’s branding and the ring 46 seniors wore to graduation last June to leading sensitive real estate acquisitions.
“Mary Beth has shown great creativity and leadership in (our) marketing campaigns,” said Jesuit Father John W. Swope, the school’s president. “She has brought unflagging energy and commitment to her work with our board of trustees and neighbors in the Fells Prospect Community Association.”
News of Lennon’s appointment included the announcement that Notre Dame of Maryland University will award two scholarships in her honor, worth $40,000 over four years, to graduating seniors from Mercy High, beginning in 2015.
In 1989, Lennon earned her bachelor’s degree in history from the college, founded by the School Sisters of Notre Dame. In addition to being president of the student government, her Notre Dame experience included volunteering in an orphanage in Guatemala operated by the School Sisters.
Lennon worked for the college from 1999 to 2007, as director of alumnae relations and then director of foundation relations. She was part of an advancement team that raised $34 million during a capital campaign that had a goal of $20 million.
“Mary Beth is a dynamic leader whose career in Baltimore has been dedicated to strengthening our city’s important institutions,” Helen T. Schneider, the chairwoman of Mercy High’s board of trustees and associate vice president of for facilities and campus services, said in a news release from the school.
Lennon, who speaks Spanish, holds a master’s in Latin American history from The Catholic University of America in Washington, D.C. A parishioner of St. Thomas Aquinas in Hampden, she serves on many local boards.
At Mercy High, where she was editor of the Shield, the school newspaper, Lennon will look to build new partnerships and strengthen existing ones, likes its Women in Medicine program at Mercy Medical Center in Baltimore.
“I look forward to working with Mary Beth to strengthen and expand the ties between our two institutions,” said Religious Sister of Mercy Helen Amos, the executive chair of the hospital’s board of trustees, in the school’s news release.
In December 2011, Mercy High opened its Center for Global Education, formalizing a big-picture approach that was already in place when Lennon was a student.
“Mercy,” Lennon said, “has been ahead of the curve in forging global partnerships, building a culture that helps students understand that their futures are tied to a global economy. That’s what Mercy did for me.”
D’Agostino, the principal, said, “There is a saying around here, Mercy is one of the best-kept secrets in town. One of her challenges will be getting that secret out.”
It is one of 198 secondary schools worldwide operated by the RSMs.
“We will be looking,” Lennon said, “for opportunities for students of Mercy Baltimore to interact with other Mercy girls around the globe.”
Also see:
Monsignor James P. Farmer honored as ‘Man for all Seasons’
Archbishop Lori visits Parkton religious ed
PrevNext