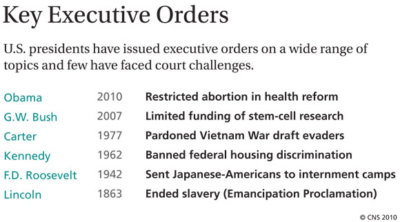 WASHINGTON – One of the biggest questions remaining as implementation of the Patient Protection and Affordable Care Act begins is whether the executive order on abortion funding signed by President Barack Obama will be effective in stopping any expanded use of taxpayer funds for abortion.

Legal experts and members of Congress disagree about the impact of the president’s March 24 Executive Order 13535, “Ensuring Enforcement and Implementation of Abortion Restrictions in the Patient Protection and Affordable Care Act.”

Anthony Picarello, general counsel for the U.S. Conference of Catholic Bishops, and Michael Moses, associate general counsel, said in a nine-page legal analysis that the executive order is likely to face court challenges and does not resolve problems on abortion funding and conscience protection in the health reform law.

Rep. Bart Stupak, D-Mich., a key player in the health reform debate, said executive orders “have been important means of implementing public policy” throughout history, noting that President George W. Bush used Executive Order 13435 in 2007 to limit the use of federal funds for embryonic stem-cell research.

“This executive order followed the principle of the sanctity of life, and was applauded and welcomed by the pro-life community,” said Stupak, a nine-term House member who recently announced that he would not run for re-election. “That these same people would now claim President Obama’s executive order maintaining that same principle is not worth the paper it is written on is disingenuous.”

U.S. presidents since George Washington have been issuing executive orders, although most of the early ones were never published and are lost to history.

In the early 1900s, the U.S. State Department began numbering them retroactively back to 1862. Executive Order 1, issued by President Abraham Lincoln on Oct. 20, 1862, established a provisional court in Louisiana during the military occupation there and set the judge’s salary at $3,500 a year.

Lincoln also used executive orders to suspend the writ of habeas corpus and to issue the Emancipation Proclamation that ended slavery.

In more recent times, President Franklin D. Roosevelt holds the record for the most executive orders issued, at 3,728 over 12 years. By contrast, President Ronald Reagan issued only 381 orders during his eight years in office.

Many of FDR’s executive orders, however, covered routine administrative tasks such as establishing migratory bird refuges or exempting specific individuals from the federal government’s civil service policies or the compulsory retirement policy at the time.

Executive Order 7654, for example, authorized “the appointment of Jacob Oblock to the position of elevator operator in the custodial service, Post Office Department, without regard to the civil service rules.”

Other executive orders had far greater import, such as President Harry Truman’s Executive Order 9835, which established loyalty review boards to decide whether civilian government employees had been disloyal during World War II and should be fired; President Lyndon Johnson’s 11246 prohibiting discrimination in the hiring practices of government contractors; and President Richard Nixon’s 11615, which set a 90-day freeze on all prices, rents, wages and salaries in response to rising unemployment and inflation in 1971.

One of the few orders ever to be overturned by a court was Truman’s Executive Order 10340 in 1952, placing all U.S. steel mills under federal control to resolve labor disputes. The U.S. Supreme Court ruled in Youngstown Sheet & Tube Co. v. Sawyer that Truman had overstepped his authority as chief executive by trying to make law, rather than interpreting an existing act of Congress.

Another executive order overturned by the courts – for the same reason – was Clinton’s 1996 order designed to bar federal contracts with companies that used replacement workers as strike breakers.

In recent years, the executive orders that have prompted the most reaction from Catholic leaders were those related to abortion or other life issues.

Just days after his inauguration in 1993, Clinton thanked his supporters who wanted to keep abortion legal by issuing five executive orders overturning abortion-related policies of the administration of President George H.W. Bush.

Two of the policies – on abortion counseling in federally funded family planning clinics and on importing the French abortion pill, RU-486, for personal use – had fought off court challenges that went all the way to the U.S. Supreme Court.

Most of Clinton’s policies had been overturned by a pro-life majority in Congress by the time President George W. Bush took office in 2001. Bush did issue a 2007 executive order limiting federal funding of research involving embryonic stem cells – an order that Obama reversed shortly after becoming president in 2009.

Timothy Stotzfus Jost, an expert in health law who teaches at Washington and Lee School of Law, said Obama’s executive order is “clearly legal” and would survive judicial review.

“As long as the president is acting within his constitutional authority as the chief executive of the nation’s executive departments and not acting contrary to a federal statute, his orders are not subject to legal challenge,” Jost wrote in a legal analysis of the order. “Indeed, they independently have the force of law.”

Speaking before the House Appropriations Subcommittee on Commerce, Justice and Science April 15, Supreme Court Justice Stephen G. Breyer predicted that the health reform law would eventually come before the court, although he did not mention the law by name or cite any area that he thought might be challenged.

“Every word in a bill is subject for an argument in court,” he said. “You have passed a law with 2,400 pages. It probably has a lot of words.”