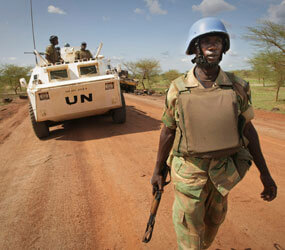 HERMANNSBURG, Germany – International faith-based, civil and political leaders concerned about Sudan called on all parties to end violence in disputed regions, including the border area of Abyei.

The leaders, meeting in Germany, also called on Sudan to stop bombings and violence against civilians in Darfur, saying humanitarian corridors need to remain open there and in other areas of unrest.

In a communique issued after the May 27-29 meeting, the delegates said the next weeks would be instrumental in deciding whether there would be two nations on the way to peace after the July 9 date that officially marks independence for Southern Sudan. In January, under terms of a 2005 Comprehensive Peace Agreement, residents of the South voted to secede from the North.

“We call for a withdrawal of the Sudan armed forces from Abyei,” and the Sudan People’s Liberation Army “to refrain from entering the region and for immediate unhindered humanitarian access,” the leaders said.

A referendum on Abyei’s political future was scheduled for January but never took place because of disagreements over who was eligible to vote. The Sudanese government insisted that the nomadic Misseriya, a northern-aligned tribe that takes its cattle to Abyei during several months of the dry season, be allowed to participate, but that was rejected by the permanent residents of Abyei, mostly members of the Dinka Ngok tribe who support the Southern Sudan government.

Similar votes are planned for other border areas, including Blue Nile and South Kordofan states, yet Sudan has dragged its feet on implementation.

Sudan seized Abyei May 21 after accusing troops from the South of attacking one of its convoys. U.N. officials said up to 40,000 people have been displaced by the ensuing violence, in which northern troops burned houses and attacked fleeing civilians.

Ethiopia has offered to send peacekeepers to Abyei; Southern Sudan has accepted the offer, but the North was still considering it June 1.

The conference delegates in Germany said they were alarmed by the fact that time was running out to resolve Sudan-Southern Sudan issues such as border resettlement and wealth-sharing. They also called for the depoliticization of armed forces in Sudan and the buildup of nonpartisan conventional forces.