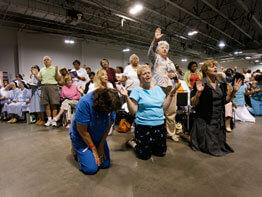 WASHINGTON – As a Hispanic woman living and working in Washington, Mirna Bonilla can feel good about her achievements in life.

She is employed by a sought-after consulting company, speaks fluent English and Spanish, and balances time between work and family. In many ways she is the paragon of the modern Hispanic-American woman.

But when it comes to her faith, she straddles two worlds, two cultures and two modes of worship at once: Bonilla is a charismatic Catholic. And she isn’t alone.

By one estimate, 14 percent of North American Catholics – nearly 10 million people – fall under the broad umbrella of the charismatic renewal. The fastest growing portion of the U.S. church, Latinos, are five times more likely than their Anglo counterparts to participate in charismatic activities.

The Catholic charismatic renewal marked its 40th anniversary this year with a June conference in New Jersey.

Like any devout Catholic, Bonilla possesses a strong faith, one she said that informs her everyday life. She attends Mass each Sunday, and even makes time for an occasional early morning or afternoon Mass during her workweek.

But in addition to her more staid, traditional mode of Catholic worship, she also frequents charismatic prayer services where high-octane, seemingly biblical events take place – such as speaking in tongues, divine healing and prophesying. In this sense her expression of faith is not unlike that of a Pentecostal or an evangelical.

At charismatic worship, she speaks in her native Spanish. For her, being charismatic is part and parcel of her culture as a Latina.

“I seek the Spanish-speaking charismatics because I find that our culture embraces God with an open heart,” she said in an interview. “I definitely believe it’s part of our culture. In the Third World countries, people suffer and their only hope is God.”

Some have enthusiastically dubbed this “bringing the fiesta to Mass.” But what does this trend say about the role of culture in informing one’s faith? Or, visa versa, the role of faith in shaping culture?

“We certainly couldn’t affirm the central teaching of the Catholic faith about God becoming man, in Jesus, and not say, ‘What was that about?’” said Jesuit Father Allan Figueroa Deck, a theologian and nationally known expert in Hispanic culture and ministry.

“That was about God engaging the reality of humanness. And what is culture? Culture is the way people are human. God embraced the human in Jesus. It’s all about culture,” the priest said.

Father Deck, currently president of the Loyola Institute for Spirituality in Orange, Calif., will become executive director of the Office for Cultural Diversity of the U.S. Conference of Catholic Bishops in Washington Jan. 1.

“Being charismatic is part of Latino culture,” agreed Ron Cruz, former executive director of Hispanic affairs for the USCCB.

“That’s the Latino culture,” he said. “It’s innate. It’s who we are. Look at a fiesta. Go to a party. You want to dance? How ‘bout a ‘corrido’? We are vibrant people.”

A “corrido” is a popular narrative song and poetry form, or ballad, in Mexican culture.

Despite the Catholic Church’s recognition of the charismatic renewal, some Catholics are concerned the church is not doing enough to address theological questions raised by Latino religiosity and the immigrant experience that encourages it.

For Father Deck and Cruz, the central question revolves around the issue of lived religion, rather than what they see as the rarified concerns of most theologians.

“In the context of the Latinos, it has everything to do with the experiences of displacement,” said Father Deck.

“It has to do with the trauma, the need for catharsis among the people who have risked their lives coming across the deserts or those that have come without papers. There’s a lot of pain, there’s a lot of disorientation in the lives of these people,” he continued.

“I think the church institution is getting too institutionalized and the needs of the laity are getting marginalized,” added Cruz, who worries that the church’s approach to theological concerns doesn’t take in issues of the common good, resulting in a theology for the sake of theologians.

“The church has got to be speaking to you about your lived life. (It) must remain relevant,” he said, “What we see now is theology of the doctrine. In theology you have many different realities.

“There isn’t enough theological reflection regarding the lived reality of the body of Christ, the laity – the intersection of culture and Christian teaching. The church should do a better job of employing its talented and highly trained theologians to find responses to these issues,” he said.