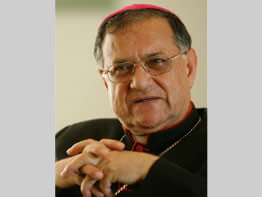 WASHINGTON – If Latin Patriarch Fouad Twal of Jerusalem had a chance to send a message to the next U.S. president, he would urge him to follow his conscience.

However, he said, “We know that politics is politics. I will pray for him for sure.”

The patriarch said he once met European politicians in Jerusalem and told them he knew that what they could do for the Middle East had limits.

“We do not want to cause any political suicide for you,” he said he told them, then added: “Do what you can do. God bless you.”

Patriarch Twal, installed as head of the Latin Patriarchate of Jerusalem in June, said he knew how much responsibility he had as head of a church jurisdiction that includes Latin-rite Catholics in Israel, the Palestinian territories, Jordan and Cyprus, so he only could imagine the responsibilities of being president of the United States. However, he said that amid it all “the new president … and any president” must not forget his family.

The patriarch was in Washington to be honored at a luncheon sponsored by the Holy Land Christian Ecumenical Foundation, an organization founded to assist Arab Christians in the Holy Land. In a talk at the luncheon and in remarks to reporters afterward, he spoke of the problems of being a Christian in Israel and the Palestinian territories.

He told reporters that before the Holy Land can have peace there must be a solution to: the problems of the creation of a Palestinian state and a definition of its borders; the status of Jerusalem, which Israelis and Palestinians view as their capital; and the situation of refugees and displaced people in the region.

“But what can be obstacles to peace can be reasons for peace,” he said.

He also spoke of the problem of Christian emigration from the Holy Land. Young people must have “more awareness that their presence is not like any other presence; it is a mission … to witness toward this faith,” he said. “If it is a mission – any mission in the world means sacrifice, means a cross – they have to bear the cross.”

However, he said, to be convinced to stay, young people must have “hope in the future,” including employment.

Concerning Christians who have emigrated to countries such as the United States, he said, “I wish them good success.”

“At the same time, I wish them not to forget those who are still in the Holy Land … to have this sense of belonging to the land,” he said. They can “help by visiting, by financing, whatever kind of help they can (give).”