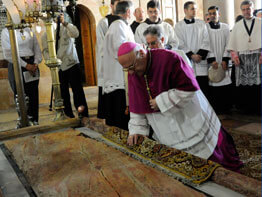 JERUSALEM – The political situation in the Holy Land has become deadlocked and new means must be found to break the cycle of violence, said Latin Patriarch Michel Sabbah of Jerusalem in his Easter homily March 23.

Politicians have come to accept the “routine of death,” believing that they only need to govern it without trying to find a solution that can give people a new life.

Criticizing both Palestinians and Israelis for recent violence, the patriarch said the continuing bloodshed in the Gaza Strip and the murder of eight Jewish seminary students at a yeshiva in Jerusalem are “no more than sterile repetitions of the events of all the past years.”

Life in the Holy Land, he said, has become “a permanent cross.”

“We will not stop repeating that security cannot be achieved by inflicting insecurity on others,” said Patriarch Sabbah during a Mass at Jerusalem’s Church of the Holy Sepulcher.

Just as Jesus’ prayer was universal, so too must be the Easter morning prayers from the Church of the Holy Sepulcher, the patriarch said.

Everyone must understand that, “in this land of death, the orders given to others to go out and kill are not the appropriate way to regain life, or legitimate rights, or security. Only Christ laid down his life,” he said.

To believe in Jesus’ resurrection is to believe and hope that the Holy Land, which is now captive to violence and injustice, can also be resurrected, he said, if only hearts and minds are “purified of the evil of war, of the hostility and of the distrust that are deeply ingrained in it.”

“That is what Easter means for us: death that leads to life, to the Resurrection. Death, which becomes through the power of love and forgiveness a redemptive power, creates a new man, a new person,” he said. “No one has the right to turn personal suffering, even great and incomprehensible, into a prison for oneself or for generations to come.”

To better understand who they are, people must place their minds in union with God, the patriarch said. This union will help believers better respond to the difficulties they encounter both in their personal lives and in society, he said.

As witnesses to the resurrection of Jesus, Christians give new hope and help maintain the hope in others despite those who are destroying the land, he said.

He admonished military and intellectual leaders in Israel to rethink their vocations so that their “permanent covenant” can be transformed into a covenant of God with all people and a “source of new life, here and everywhere.”