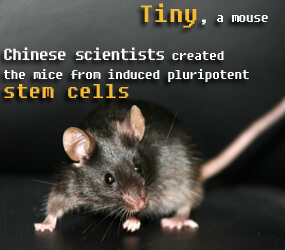 WASHINGTON – The work of two teams of Chinese scientists who created live mice from induced pluripotent stem cells is “another demonstration that researchers don’t need to destroy embryos” to achieve stem-cell advances, according to a pro-life official at the U.S. Conference of Catholic Bishops.

The research done by separate teams in Shanghai and Beijing and published July 23 in the scientific journals Nature and Cell Stem Cell showed that the so-called iPS cells have “the full range of uses that embryonic stem cells are proposed for,” said Richard M. Doerflinger, associate director of the USCCB Secretariat of Pro-Life Activities.

“The immediate finding is that induced pluripotent stem cells, created without harming any embryos, really are as versatile as embryonic stem cells,” he said.

But Doerflinger also warned in a July 27 interview with Catholic News Service that this latest breakthrough in stem-cell research shows that iPS cells are “so powerful” that researchers “might be able to put them in a human embryo and change the genetic makeup of that child and all the future generations” related to the child.

“It’s an ominous thing, that they could be remaking people’s genetic traits,” he added. “It’s a powerful technology and it could be misused.”

The two Chinese teams had varying degrees of success in creating genetic duplicates of mice by reprogramming skin cells from adult mice into iPS cells and then implanting the embryos created into a surrogate mother.

The first team, led by Qi Zhou of the Institute of Zoology in Beijing and Fanyi Zeng of Shanghai Jiao Tong University, reported 27 live births, starting with a mouse named Xiao Xiao or “Tiny.” All 12 of the genetic duplicates that were mated produced offspring without abnormalities; the team reported hundreds of second-generation and more than 100 third-generation mice.

The second team, headed by Shaorong Gao of the National Institute of Biological Sciences in Beijing, produced only two live births using the same technique, with one of those dying in infancy. The team is currently trying to mate the surviving mouse.

In the U.S., the National Institutes of Health recently issued final guidelines for federal funding of embryonic stem-cell research, requiring that such research use only embryos created for reproductive purposes at in vitro fertilization clinics and no longer needed for that purpose.

The draft guidelines set standards for voluntary informed consent by those donating the embryos, and said no NIH funds would be given for research that did not meet the standards.

The final guidelines, however, set up an “alternative pathway” for the approval of funding of research involving embryos donated before the new guidelines took effect or involving stem-cell lines developed in foreign countries. A working group made up of about 10 scientists and ethicists is to look at each such application on a case-by-case basis to determine whether it meets the core principles of voluntary informed consent.

Cardinal Justin Rigali of Philadelphia, chairman of the USCCB Committee on Pro-Life Activities, strongly criticized the final guidelines and said the debate over embryonic stem-cell research “now shifts to Congress, where some members have said even this policy does not go far enough in treating some human beings as objects to be created, manipulated and destroyed for others’ use.”

Some had predicted that President Barack Obama’s decision to reverse the limits on funding of embryonic stem-cell research established under President George W. Bush would lead to the rapid expansion of such research, particularly at the university level.

But the results of a survey by The Chronicle of Higher Education, published July 21, found that only 6 percent of major research universities – those with $100 million or more in federal grants – planned to increase research on human embryonic stem cells “by a large amount.”

The survey also found that most of the universities said they had increased their contribution to the indirect costs of scientific research on campus by 50 percent or more over the past five years.

A federal policy established in 1991 limits the indirect costs that a university may collect on each federal research grant for expenses like photocopying, accounting and electricity.