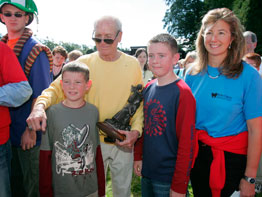 DUBLIN, Ireland – A Hole in the Wall Camp founded by the late actor Paul Newman helps sick children get their childhoods back, said a New York Catholic working there as a volunteer.

Jose Loya, a member of Blessed Sacrament Parish in Albany, has been working in the Barretstown camp outside Dublin since May and extended his stay until November because of the personal reward volunteering gives him.

“Working at Barretstown and at other Hole in the Wall camps has really helped my faith,” said Mr. Loya. “It is why I have been coming to camp year after year; these are such unique places that embody the way people should be, and how we should treat ourselves and each other.”

Barretstown was the first Hole in the Wall Camp established outside the United States and, like its American counterparts, provides a place where children with cancer and other life-threatening illnesses can have therapeutic recreation – more commonly known in Barretstown as “serious fun.”

For acutely sick children, life often becomes a cycle of hospital visits and medical treatment that can be as debilitating as the illnesses from which they suffer. They face a list of things they cannot do and lose contact with their regular friends and schoolmates.

But at Barretstown, where activities range from arts and crafts to horseback riding and mountaineering, children experience what it is to be a child and to enjoy the adventures of childhood.

“Every day you see these children come out of themselves a bit more, achieving things they never imagined and forgetting their problems – it’s like a miracle happens here every minute,” said Mr. Loya, who got involved in the Hole in the Wall movement through his membership in the Phi Kappa Tau college fraternity. Newman was a member of Phi Kappa Tau, and the fraternity has a long history of supporting the charities he founded.

Set in a 500-acre estate and featuring a country house built around a 12th-century Anglo-Norman castle, Barretstown was the property of the Archdiocese of Dublin until the 16th century. In the 1960s, it was owned by Canadian cosmetics giant Elizabeth Arden. Ms. Arden is said to be responsible for the color of the castle’s front door, which is painted red as a tribute to her Red Door perfume brand.

Following Ms. Arden’s death, Barretstown was owned by biscuit manufacturer Garfield Weston, whose improvements to the estate included a lake in front of the castle, which is now a location for water sports. The Weston family presented the estate to the Irish government in 1977 and it was used as a conference venue and as part of the National Stud horse showcase until it was given to the Hole in the Wall organization in 1994.

Each year about 1,400 children and their families visit the camp and about 700 volunteers like Mr. Loya are needed to run Barretstown’s programs, which also include residential bereavement counseling for the families of children who have died.

It takes about $7 million a year to run Barretstown, which receives about 4 percent of its funding from the Irish government with the rest coming in donations from individuals, companies and foundations.

The acting chief executive of the camp, Mary Conway, said she and all staff members, volunteers, former campers and Barretstown’s supporters were “extremely saddened” by the news that Newman died Sept. 26 at age 83 of cancer.

“We are very grateful that Paul Newman came to Ireland 14 years ago to establish Barretstown,” she said. “Since then the charity has become a leading center for therapeutic recreation in Europe, a place where children with serious illness and their families can come to stay and take part in challenging activities which help rebuild their self-esteem and confidence.”