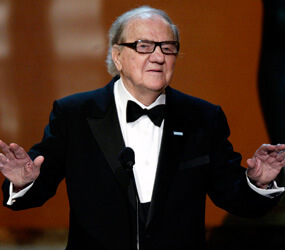 WASHINGTON – Oscar-winning actor Karl Malden, who famously portrayed Father Pete Barry, a mob-combating Catholic priest in 1954’s “On the Waterfront,” died July 1 in Los Angeles of natural causes. He was 97.

Funeral arrangements were not announced.

Some news accounts said Malden was a Catholic but a spokeswoman at his family’s church in the Gary, Ind., area, where he grew up, told Catholic News Service July 7 that he was Orthodox. His family belonged to St. Sava Serbian Orthodox Church in Merrillville, Ind.

Malden portrayed a priest four times on television and in film, including a 2000 appearance on NBC’s “The West Wing,” the final role of his career. For the part, Malden used the same stole and breviary he had used nearly 50 years earlier to play Father Barry.

Writing for National Catholic Reporter, Sister Rose Pacatte, a member of the Daughters of St. Paul and founding director of the Pauline Center for Media Studies, said Malden “had an interesting pop culture link with the Catholic Church.”

Although Malden often portrayed priests, she noted, he also played a lead role in the 1956 film “Baby Doll,” which earned condemnation from the church’s League of Decency for “carnal suggestiveness.”

Born Mladen George Sekulovich on March 22, 1912, in Chicago, Malden was the oldest son of a Serbian father and a Czech mother. He did not learn to speak English until the age of 5, when he started attending kindergarten in Gary.

Following his 1931 graduation from Emerson High School in Gary, Malden worked in steel mills for three years before leaving to pursue dramatic training at the Goodman Theater Dramatic School in Chicago. He changed his name to Karl Malden when he was 22.

In 1937, Malden moved to New York City and began acting on Broadway. During his stage career, Malden appeared in Arthur Miller’s “All My Sons” and “A Streetcar Named Desire” by Tennessee Williams. Malden made his film debut in 1940, playing a minor role in “They Knew What They Wanted.”

After serving stateside in the U.S. military during World War II, Malden continued his film career, earning a 1951 Oscar for his supporting role alongside Marlon Brando in the on-screen version of “A Streetcar Named Desire.”

Three years later, Malden joined forces with Brando once again for “On the Waterfront.” In 1998, the film was named the eighth best American film of all time by the American Film Institute.

Known as a fine character actor, Malden continued to garner strong supporting roles in films throughout the 1950s and 1960s. In 1972, he was tapped to star as a hardened, veteran homicide detective in the television series “The Streets of San Francisco.” Malden’s co-star in the series was a young Michael Douglas.

After the series ended in 1977, Malden continued to star in small film and television roles until 2000. He served as president of the Academy of Motion Picture Arts and Sciences from 1988 to 1993.

In addition to his work as an actor, Malden was well-known as a pitchman for American Express Travelers Cheques in the 1970s and 1980s. His commercials for the company coined the popular advertising slogan “Don’t leave home without them.”

Malden’s personal life provided a rare example of Hollywood stability. He married actress Mona Greenberg in 1938 and the couple remained together until Malden’s death.

Commenting on Malden’s extensive body of work as an actor as well as the unusual longevity of his marriage, Sister Pacatte said the actor created “a wonderful legacy to leave the world – a life of art and integrity.”

In addition to his wife, Malden is survived by his daughters Mila and Cara, his sons-in-law, three granddaughters and four great-grandchildren.