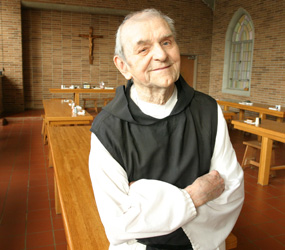 CONYERS, Ga. – “I wanted to be a simple religious. A nobody would be the best thing,” said Trappist Father Luke Kot, who helped establish Our Lady of the Holy Spirit Monastery in Conyers 65 years ago.

“I don’t try to be too religious, or try to be too monkish,” he said.
At 97, he is an energetic and talkative fellow who can trace the story of the institution some 30 miles east of Atlanta, from its start in a 100-year-old barn to the “pine-board monastery” to the monastic complex on 2,000 acres. He is the last living founder.

The monastery marked its 65th anniversary March 21, the feast of St. Benedict. That day in 1944, 20 pilgrim monks from Kentucky started a new house for members of the Order of Cistercians of the Strict Observance, or Trappists, in Rockdale County.

A two-day deluge of spring rain greeted them as they settled in the barn at what had been Honey Creek plantation. The tin-roofed barn was their home for eight months during the construction of the pine-board monastery.

At the first supper, to fortify the men for the work ahead, they prepared “soup, potatoes, hard-boiled eggs, butter, bread and our famous, barely coffee drink,” according to an account typed by Father Luke. “That was considered a very sumptuous meal for monks on those days!”

Monks were an unfamiliar sight in the Deep South. Atlanta was part of the Diocese of Savannah; the Atlanta Diocese was established in 1956 and was made an archdiocese six years later.

“We were not really welcomed in the South. There was not even a Catholic family in Conyers,” said Father Luke as he ate his breakfast of toasted rye bread and decaf coffee in the infirmary during a recent interview with The Georgia Bulletin, Atlanta’s archdiocesan newspaper.

More than 40 monks currently live at the monastery, and they are working to ensure their sustainability in the years ahead. Their plan is to strengthen retreat work and link the institution to a national heritage area that crosses their property.

He is “especially gracious with the new and younger members, regaling them with stories of the old days,” said the abbot in an e-mail.

“We are happy to be celebrating the blessings of 65 years here in Conyers and look forward with God’s grace to be here for many, many years to come,” added the abbot.

Father Luke has wispy white hair, blue eyes and wears a black skullcap. A three-wheeled walker – with a miniature Georgia vanity license plate of “Luke” – helps with his balance.

He prays with the community throughout the day. But because of his age the abbot has forbidden him to attend the 4 a.m. vigil prayer that starts a monk’s day. And at the 7:30 p.m. compline, or night prayer, Father Luke often prays in his room.

He is the son of illiterate Polish immigrants; his father worked as a carpenter and his mother as a midwife. He knew early he wanted a life in a monastery.

A magazine he got at home in Niagara Falls, N.Y., introduced him to the Trappists.

On Oct. 28, 1938, at the age of 27, he became a novice at Our Lady of Gethsemani monastery in Kentucky. Father Luke’s time there overlapped with that of the famous writer and monk, Father Thomas Merton.

“He was not given any special (attention). He was a simple novice,” said Father Luke.

In those days monks kept silent throughout the day, except in special rooms. They communicated with sign language.

“I lived it for 30 solid years. We didn’t talk at all, not speaking everywhere,” he said.

A monastery should be peaceful, so people are not distracted, he said.

“When you are praying or walking, you want silence. It is not a law. It is a gift of God. If you don’t know silence, then you have difficulty in praying. You learn. After you learn to be silent then you live a better life of peace and quiet,” he said.

A factory laborer after graduating from high school, Father Luke wanted to live as a brother and perform manual labor. However, a superior told him to get an education to become a priest.

He was the abbot’s secretary for years, despite asking instead to fill wheelbarrows during the monastery construction. Then he became responsible for sewing the monks’ distinctive habits.

For more than 50 years, Father Luke was the only tailor for the men, stitching the white habits, the black outer garments known as scapulars and anything else that needed to be mended.

The only monk trained in what he calls the “sew-sew” trade, Father Luke rushed to finish scores of habits and scapulars in June before he gave up working at the monastery’s 80-year-old Singer sewing machine.

“I’m content. The point is I am just a person who is a monk,” Father Luke said. “I am just like you people. We have to learn gradually what life is all about. It takes time.”