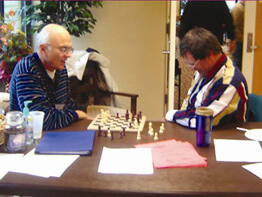 At the age of 22, Jason Bamburg had his own Baltimore City business called Jay’s Rental until he got “caught up in the wrong group” and lost it all, he said. He is now homeless, jobless and waiting to see if he can move to Louisiana to be with his family while still on parole.

Mr. Bamburg is just one of the men who spent a week at the Our Lady of the Chesapeake, Lake Shore, winter relief shelter, sponsored by the Arundel House of Hope, an organization that provides housing and supportive services to the homeless and poor in Anne Arundel County.

“I heard some people say this is the best place they have been,” said Mr. Bamburg, who is now 26.

Deacon Donald Latrick, pastoral associate, Jack Streb, vice-chairman of the parish council, and Phil Bailey, director of Arundel House of Hope and coordinator of the Winter Relief Effort, came together to start a winter relief shelter at Our Lady of the Chesapeake. The shelter was a great success for the parish and the some 30 guests who visited the week of Jan. 15-22.

“We heard from our guests that they looked forward to returning here every night,” said Deacon Latrick. “They said they felt they were very well treated and were respected.”
For a week, more than 100 parishioners and youths worked to supply food and warm clothing for the men. At first planning committee members were afraid they wouldn’t have enough support, but in the end the room wasn’t big enough to hold all of the volunteers who stepped forward to play games, cook meals, distribute medications and even cut hair.

“From our point of view it went off perfectly,” said Dominic Aiello, president of the parish council.

Mr. Aiello said one heavier-set man didn’t have a coat. When someone finally found a coat that fit him, he was so happy that he even went to bed in it, said Mr. Aiello.

“We are just doing what we were called to do, be Christians,” said Carole Dowell, a parishioner and volunteer, whose 11-year-old grandson gave her some money to help buy clothes for the men. “They have all been very grateful.”

On Sunday, some of the men attended Mass with the parishioners, which gave Father Brian Rafferty, pastor, a sense of joy. He said the planning took more effort than time.
Father Rafferty said his parishioners are doing God’s will and he couldn’t be more proud of them. The people involved in the winter relief shelter are very happy with the outcome and are looking forward to doing it again next year.

“There are three things the homeless need: food, shelter and dignity,” said Dov O’Nuanain, a guest at the shelter. “Everyone else treats you like dirt, but not these people; they threat you with respect.”