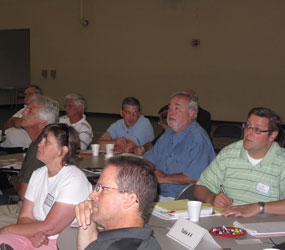 Make better use of social media to spread good news that is millennia old.

Teach young pastors to lead, so that they don’t have to micro-manage.

Keep laity in the loop.

Those points have been among the recurring themes during a series of “Parish Planning” meetings in the Archdiocese of Baltimore, an early step in the strategic response to a looming priest shortage.

“This is the beginning point,” Archbishop Edwin F. O’Brien told 14 roundtables of parish lay leaders from Baltimore City June 23 at St. Matthew, Northwood. “I do have opinions, but I don’t have a plan. That would be a waste of time … I will make any sacrifice, and ask you to do the same.”

In a series of columns in The Catholic Review that began in September 2010, Archbishop O’Brien outlined some alarming statistics, among them: if current trends hold, the number of active priests in the archdiocese “will be reduced from 153 to 100 over the next 15 years.”

A pastoral letter the archbishop wrote in April included, “We must be open to closures and mergers of parishes and changes to Mass schedules.”

According to the archdiocese, the archbishop intends to begin the parish planning initiative in September, and its expected to be a “multi-year effort that will review parish life, personnel and resources.”

It will incorporate the input of parish lay leaders, which began June 9 and 11 at St. John the Evangelist in Columbia, moved June 22-23 to St. Matthew, Northwood; stopped at St. John Regional Catholic School in Frederick June 23 and 25; and concludes July 5-6 at St. Joseph, Fullerton.

On day one, small groups consider a sampling of nine questions, ranging from “What elements constitute a vibrant parish?” to “How can we assure that the laity are involved and informed throughout the planning process?”

Many substantive answers were given to the question, “Are you aware of examples where a parish has worked with another parish to utilize resources more efficiently?”

“The Catholic Community of South Baltimore, with three parishes and one pastor, provides van service to Mass,” said Bob Lyle, finance chair of St. Matthew. “Right here at St. Matthew, confirmation (preparation) combines seven parishes. … Collectively, we should be able to figure this out.”

The format does not include pastors or parish priests, and laity spoke their minds to the archbishop, occasionally with no regard for canon law and church teaching, as several presenters called for the ordination of women. In 1994, according to Catholic News Service, Pope John Paul II said the church’s ban on women priests is definitive and not open to debate among Catholics.
At St. Matthew, Northwood, there was lingering resentment over the closing of 13 schools in spring 2010.

Bob Peters, of St. Timothy in Walkersville, was among the presenters who suggested that pastors and priests be freed from administrative tasks to focus on the sacramental life of the parish community.

“The priest focuses on the spiritual,” Peters said in Frederick, “and let the pastoral council take on more of the other stuff, the business issues. That may take some pressure off of our pastoral leaders.”

“We’re all saying the same thing,” said John Jurchak, of Our Lady of Mount Carmel in Thurmont, “that they (priests) are overworked, overburdened and on the path to burnout. … A priest who’s freed from secular duties can connect with those inactive Catholics.”

Several presenters at St. Matthew, Northwood, made a plea to more aggressively promote vocations, to evangelize and grow the church, rather than shrink it.

“We will be repeating this process in a few years,” said Sabrina Warren Bush, of St. Bernardine, “if we don’t grow our church.”

On the matter of what to do with a parish that is not sustainable, it was suggested that parishioners be informed of the baseline for remaining open, so as to instill a sense of ownership.

“What criteria are we going to use?” Archbishop O’Brien said in Frederick. “That’s what this is all about.”