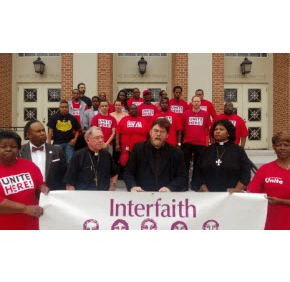 By Maria Wiering
mwiering@CatholicReview.org
Twitter: @ReviewWiering
More than 50 area faith congregations – including four Baltimore Catholic parishes – will host low-wage workers during Labor Day weekend services to speak about their efforts to improve working conditions and wages.
The event, Labor in the Pulpits, is being held in Maryland for the first time. St. Anthony of Padua in Baltimore was the site of a press conference and clergy blessing Aug. 29 promoting the event. The parish will host workers at weekend Masses Aug. 30-Sept. 1.
Father Ty S. Hullinger, pastor of St. Dominic in Hamilton and St. Anthony of Padua/Most Precious Blood in Baltimore, said workers’ presentations at his parishes will connect Scripture and the Eucharist to Catholics’ response to social injustices.
“It puts flesh on the Gospel we hear,” he said.
Father Hullinger is a member of the steering committee for the Interfaith Worker Justice-Maryland, which is organizing Labor in the Pulpit. The local chapter is affiliated with the Chicago-based Interfaith Worker Justice network. According to the national organization’s website, its core issues are wage theft, paid sick days, workplace standards and protecting workers’ right to unionize.
Many of the workers participating in Labor in the Pulpits are employed at BWI Thurgood Marshall Airport food concessions and shops. They are working to implement a workers’ bill of rights to guarantee full-time work, fair wages and benefits, job security and the right to unionize, according to an Aug. 29 press statement from Interfaith Worker Justice-Maryland.
Most BWI workers earn little more than minimum wage and are unable to get full-time hours, requiring them to get second or third jobs elsewhere, Father Hullinger said.
“They need a living wage, and they’re not really making it now,” he said.
Interfaith Worker Justice-Maryland has partnered with other labor organizations to improve wages and working conditions in Baltimore and other parts of the state. The BWI effort is part of the Maryland Campaign for Fair Development, advocates for decent living wages for Maryland residents.
Other Catholic parishes participating in Labor in the Pulpits are St. Matthew in Northwood; St. Francis of Assisi in Baltimore; and St. Mary of the Assumption in Govans.
Monsignor William F. Burke, pastor of St. Francis, said the event highlights “one of the principles of social justice and the church’s teaching – the dignity of work.” St. Francis plans to hold its event on another weekend because Archbishop William E. Lori is scheduled to visit the parish Sept. 1.
More than a century’s worth of social encyclicals, beginning with Pope Leo XIII’s “Rerum Novarum” (Of New Things) in 1891, have emphasized the Catholic Church’s support for workers to earn living wages in good working conditions. The U.S. Conference of Catholic Bishops is a longtime supporter of workers’ rights to just wages and benefits, and to unionize. Its Committee on Domestic Justice and Human Development issues an annual Labor Day statement on the topic.
“When one works, one’s wage should be able to provide for the basic human needs of an individual or family – food, clothing, health care, shelter, education,” Father Hullinger said. “When those conditions aren’t met, I think Catholic social teaching very clearly states the right to make those needs known and to press for those needs to be met by society.”
Labor in the Pulpits’ interfaith basis is “huge,” he added.
“It really shows workers a tremendous support, from synagogue to mosque to temple to church, that faith communities are united together, too,” he said. “From our different worship experiences and perspectives, and different beliefs about God … what God gives human persons as far as human dignity, that’s universal.”
Labor in the Pulpits’ clergy blessing fell on the same day as a national strike of fast food workers who want to see their wages rise to $15 per hour, from their current average of $9 per hour.
Also see
On the edge: Why the poor are players in the election’s economic debate
PrevNext