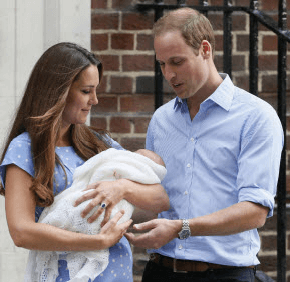 By Maria Wiering
mcwiering@CatholicReview.org
Twitter: @ReviewWiering
The world got its first glimpse of Britain’s new prince July 23 as the Duke and Duchess of Cambridge left St. Mary’s Hospital in London. News reports described Kate Middleton, as she was once known, as appearing “robust” as she and her husband, Prince William, waved to onlookers while holding their new son.
Like all new mothers, the duchess now faces a period of adjustment from pregnancy to motherhood. Hyacinth Todd, 62, a longtime labor and delivery nurse at St. Agnes Hospital in Baltimore and self-described “royal fan,” said she has followed the duchess’ pregnancy closely. Her affection for the members of the British monarchy was heightened after meeting Prince Charles, now a grandfather, at a function in the Cayman Islands in 1973.
A native of the Cayman Islands, Todd, a Catholic, trained as a nurse midwife in Britain. She worked in the Cayman Islands for six years before moving to the United States.
Drawing on her expertise, Todd offered the following advice for all new mothers, royal or commoner.
1.                Study up before the birth. “Take advantage of classes offered by your hospital,” said Todd, who has worked at St. Agnes for 32 years. St. Agnes, for example, hosts classes on childbirth and the postpartum period designed to allay an expectant mother’s fears. The hospital also offers classes ranging from infant CPR to preparing siblings for a new baby.
2.                 Breastfeed. Founded by the Daughters of Charity in 1862, St. Agnes encourages mothers to breastfeed and offers support and education from lactation consultants. “It’s cheap, it’s nutritious, it’s convenient,” Todd said of breastfeeding. “Because of (breast milk’s) anti-infection properties, babies tend to have less incidents or pronounced symptoms of ear infections, respiratory infections and allergies. SIDS (Sudden infant death syndrome) is less common.”
3.                 Get plenty of rest. Todd subscribes to the age-old wisdom that mothers should sleep when the baby sleeps. “When you are in a better mood, the baby will also tend to rest better,” she said. “When you have lack of sleep, you tend to be more irritable.”
4.                 Nutrition and exercise are key. Todd said it is important for postpartum women to be mindful of eating from all the food groups while drinking plenty of fluids. Good nutrition benefits a breastfeeding mother’s baby and helps her milk supply, she said. St. Agnes offers a dietician-taught class on making healthy eating choices before, during and after pregnancy. New mothers should also exercise, Todd said. “Introduce your baby to the outdoors, that’s what I always say,” she said.
5.                 Keep options open. Some expectant mothers create a stringent birth plan, but Todd said it is best to be flexible. “Be open to pain relief,” she said. “Don’t be set on any one thing. Just take advantage of all the options that are offered.” Mothers who have taken classes, know their options and keep an open mind do best in labor, she said.
Also see:
Catholics face their own name considerations when it comes to new babies
Pope is most influential world leader on Twitter
PrevNext