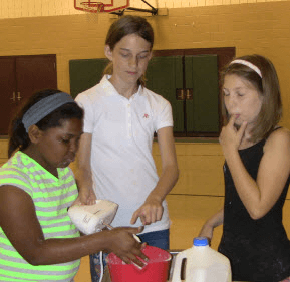 The whirring of mixers, cracking of eggs and clanging of pans and measuring cups were among the sounds heard as more than a dozen students participated in cupcake-making camp at St. Philip Neri School in Linthicum July 24.

“Maybe one day we’ll end up on the Food Network,” mused 11-year-old Gabby Grant as she watched a friend mix ingredients. “Isn’t that everyone’s dream?”

The students, including a handful of young men, signed up for a three day camp where they learned about the mixing, baking and icing that goes into preparing cupcakes. On this day, they made rainbow cupcakes and chocolate chip cookie dough confections.

“This is a life skill they need,” said middle school teacher Christy Crawford, referring to students’ ability to measure out ingredients and learn to prepare food.

Crawford runs the camp with Michelle Novak, a second-grade teacher at St. Philip Neri. The energetic duo also runs a cooking camp, which they have done for the past four years.

Her daughter, Emily Crawford, said she finds cooking a lot of fun and likes to “mess around with cupcakes.”

“My favorite part is trying all the different flavors,” said Emily, who is 11 and will be a sixth-grader at St. Philip Neri in the 2013-14 school year.

Gabby, who will also be in the sixth grade said, “It’s a talent not that many people have.”

Sydney Burns, who is 11 and will be a seventh-grader, signed up for the camp with her best friend.

“I did this (cooking) camp the first year and I liked it, so I decided to stick with it,” said Sydney as she carefully layered red, yellow, blue, green and purple batter into 12 cupcake papers. “When you make food, you get to keep it and share it with your family.”

She said she does help out in the kitchen at home making grilled cheese, tacos and homemade pizza bagels, as well as brownies and cake.