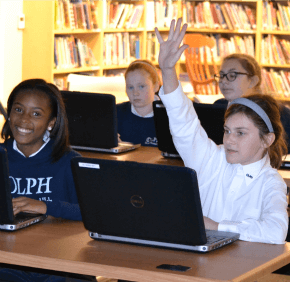 Renovating a 1930s-era projection booth improves the sound of assemblies at The Catholic High School of Baltimore. Computer tablets and teacher training have brought digital learning to the 158-year-old St. Augustine School in Elkridge.

Carpet tile may not seem like a big deal – but it is at St. Elizabeth School in Baltimore.

They are among 28 Catholic schools in the Archdiocese of Baltimore able to improve their students’ educational experience over the last two years, thanks to grants from The Marion I. and Henry J. Knott Foundation.

Since its founding in 1977, the Knott Foundation has awarded $55 million in grants. Most went to education – and most go to Catholic schools.

“In recent years we’ve touched about 80 percent of the schools in the archdiocese,” said Kelly Medinger, executive director of the foundation.

Grants reflect the intentions of the Knotts, who wanted to support Catholic organizations while helping people of all faiths, according to Patrick Rodgers, one of their grandsons and a foundation trustee. “A lot of it is what the original donors’ intent was,” he said.

The board of trustees has 29 members from three generations of the Knott family.

“All of our trustees live in Maryland,” Medinger said. “All of our giving has remained very local.”

Of the 200 or so requests the foundation receives annually, 40 to 50 grants are approved, according to Medinger. Funding comes after  trustees evaluate letters of inquiry and visit with leaders of organizations invited to present full proposals.

At St. Elizabeth, which serves 104 students with special needs from nine counties, the 2015 carpet tile replacement is only the latest project supported by the Knott Foundation, according to Christine Manlove, executive director of the school.

“The Knott family and foundation have been supporting children with special needs and this school for more than 50 years,” she said.

Previous grants helped fix a leaky gym roof and install smart boards in classrooms – which have enhanced the learning experiences for both verbal and non-verbal students.

“Teachers say our kids are so much more engaged,” Manlove said.

“I’m impressed with the values they’ve passed down through the generations,” she added.

Thanks to a 2015 grant, St. Augustine School put 30 iPads to work in grades three, four and five. The Elkridge school’s officials requested teacher training as well as the tablets.

The tablets are most often used in small-group math and language arts lessons, she said.

“The Knott Foundation has been extremely helpful and generous,” Schratz said. “They are a tremendous resource and asset to Catholic education in the archdiocese.”

At Catholic High, the new audio-visual production booth adds the final piece of the new visual and performing arts program. Now, theater students can study sound and lighting techniques, and school assemblies and plays have more options for sound, video and digital presentations, according to Dori DiVenti, director of institutional advancement.

“These gifts are generational,” St. Elizabeth’s Manlove said. “When you change the life of a child, you change that family.”

God wants to save you; will you let him? pope asks