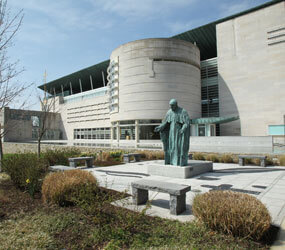 The announcement came during the business session of the Knights’ 129th annual convention Aug. 2-4.

Anderson, delivering his annual report, said that over the next year, the fraternal organization will build a shrine to Blessed John Paul and put up related exhibits on the property.

“True to Pope John Paul II’s vision, and using the story of his life as inspiration, the shrine will be an opportunity to evangelize and spread the good news of the Gospel through a new evangelization,” he said.

The center, which went up for sale about 18 months ago, sits on 12 acres just steps from the Basilica of the National Shrine of the Immaculate Conception and The Catholic University of America. It cost $75 million to build and the property has been valued at $37.7 million.

The Knights bought the property for $22.7 million, according to a letter from Detroit Archbishop Allen H. Vigneron to priest and laypeople of the archdiocese. The letter, which is posted on the archdiocesan website, also said the sale should be finalized in 60 days.

The center opened in 2001 with financial backing from the Detroit Archdiocese. Under the terms of the sale, the archdiocese will receive about $20 million, and Catholic University, which has a secured interest in the land, will receive $2.7 million.

“Because of his tireless evangelization efforts, an entire generation of Catholics has become known as the ‘John Paul generation,’ and certainly we are honored to continue to spread his profound and powerful message of hope for our country, our continent and our world,” Anderson said in his remarks.

The complex has been overseen by a foundation chaired by Cardinal Donald W. Wuerl of Washington, who on the day of Anderson’s announcement issued a decree establishing the cultural center as an official archdiocesan shrine.

Cardinal Wuerl said beatification of the late pope “has focused increased attention on the great gift that he is for the church.”

“Evident devotion to him prompted the decision to designate the facility being acquired by the Knights of Columbus as an archdiocesan shrine. This shrine will provide a focal point for increased devotion to Blessed John Paul II and an ongoing recognition of his legacy,” he added.

Exhibits planned for the center will include displays on the life and legacy of Blessed John Paul and on the Catholic heritage of North America.

Cardinal Wuerl was attending the Knights’ convention and in remarks there said: “I can think of no more fitting way to venerate this extraordinary pope whom the church has declared ‘Blessed’ and to honor and carry on his legacy than through this shrine.”

The center experienced financial difficulties throughout its history as it never attracted the number of visitors it expected. In 2006, because of low attendance rates, it discontinued museum activities and focused on being a place of research on the pontiff. It has been open only by appointment.

Archbishop Vigneron in his letter thanked the Knights for “stepping forward to make this transaction a reality.” He applauded the fraternal organization’s intention to “strengthen the vision of the center and continue the intended purpose for the building and land.”

He noted the amount the archdiocese will receive from the sale is “notably less than the $54 million” it has invested in the center’s design, construction and maintenance, but nevertheless “the sale will enable us to recoup some of what we invested and will end archdiocesan outlays averaging $65,000 per month to maintain the building and grounds.” The proceeds “will help stabilize” archdiocesan finances, he added.

Archbishop Vigneron said all of the offers from potential buyers were in the $20 million range, but the Knights “presented the best offer and terms of sale.”

In an interview with the Catholic Standard, Washington’s archdiocesan newspaper, Cardinal Wuerl said that given Pope John Paul’s “great impact” on the church, he hopes the new shrine dedicated to the pontiff at the center “will provide a focal point of new devotion” to him. He hopes, too, that it will help spread among Washington Catholics and all pilgrims “the great gift of the church that Blessed John Paul II was and continues to be.”

He added that with the Knights purchasing the center “with the specific view of enhancing the new evangelization of America – which was so much the (legacy) of John Paul II – I think we’ll see a resurgence, not only in devotion to Blessed John Paul II, but also in the vitality of the programs (offered there).”

The Knights of Columbus worked closely with Pope John Paul throughout his papacy. For more than a century, the fraternal organization has been involved with Catholic institutions in Washington. To date, the Knights’ work includes major support for the national shrine, the U.S. bishops’ conference, Catholic University and the John Paul II Institute for Studies on Marriage and Family, now located on the university’s campus.

Last August, the Dominican Sisters of Mary, Mother of the Eucharist signed an agreement with the Archdiocese of Detroit last August to buy the facility as a house of studies for its members, but in march the order decided not to go through with the purchase, because it would have cost too much to remodel the space to meet its needs.

In May, the center was opened for a celebration of Pope John Paul’s beatification.

Contributing to this story was Mark Zimmermann in Washington.