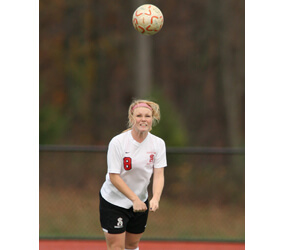 She’s known as the “iron woman” of Archbishop Spalding soccer.

Before the flu forced her to sit out a single contest this season, Kirsten Frank played in more than 80 straight soccer games over four varsity seasons at the Severn high school.

“Out of those 80 games, close to 60 have resulted in shutouts – and that’s with a couple of different goalkeepers,” said Bob Dieterle, Kirsten’s soccer coach. “The common denominator has been Kirsten for all those games.”

Dieterle noted that the 17-year-old senior defender “easily” racked up the most career minutes of any player Spalding has fielded.

“Not only has she started them all,” he said, “but she’s played almost every minute of every game.”

Kirsten helped Spalding win another Interscholastic Athletic Association of Maryland A Conference championship Nov. 1, when the Cavaliers defeated Mercy, 2-0. The victory capped off a 20-0-1 season and represented the third championship Kirsten helped her team win in the last four years.

A team captain, Kirsten deflected attention from her own contributions, noting that she loves soccer because it’s a team sport.

“It’s not a one-man game,” she said. “You need a whole team to be successful.”

Kirsten said she was disappointed that illness brought her playing streak to an end this year.

“If you have a cold or something, it always seems like it goes away once you start playing,” she said with a laugh, “but this time I had a fever and my mom said I needed to rest.”

“She has great speed,” he said. “She gets a great read on the field. She anticipates very well, she’s got great strength and she’s very good at beating people one-on-one.”

A parishioner of Sacred Heart in Bowie, Kirsten is just as committed in the classroom. Holding a 3.7 grade point average, she takes all honors classes and two advanced placement courses. Her favorite subject is art.

In the last three years, Kirsten was active in the Key Club – a community service organization at Spalding that organizes projects for others in need. She plans to play soccer for Ohio University.