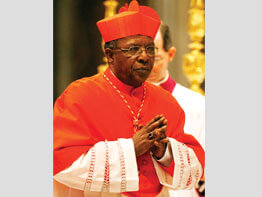 For many Kenyans, Cardinal John Njue is the heroic voice of the disenfranchised and the justice-deprived.

Knowing how much influence he wields with the nation’s people, his is a voice the country’s politicians tremble at hearing.

When he comes to Baltimore for an eight-day visit that begins July 3, it should be evident how passionate Kenyans are about the man who was elevated to cardinal by Pope Benedict XVI last October.

St. Matthew, Northwood, is serving as host for the cardinal’s trip, and more than 600 natives of Kenya residing in the U.S. are expected there July 5, when Cardinal Njue will celebrate Mass in their native Swahili language.

Wasafiri Voices, a group of Kenyan Catholics at St. Matthew, extended an invitation to Cardinal Njue in December 2007.

“When he said yes, it was really, really a feeling of great joy,” said Patrick Ngana, chairman of the committee for the visit. “It’s the biggest occasion we can have for our group.”

Mr. Ngana, who has been in America for 12 years, said many of his fellow countrymen feel a paternal connection with Cardinal Njue and regard him as the “voice of the common man..”

The cardinal has been outspoken in Kenya since last December, when hundreds died in violent skirmishes following claims of rigged elections that favored Kenya President Mwai Kibaki.

“When he says something, he’s going to have a lot of people following it,” Mr. Ngana said of Cardinal Njue. “It’s going to sway a person one way or another.”

Cardinal Njue was born in 1944, in the small village of Kirari in Mukangu, in the Eastern Province. He was baptized at the age of 4 and went to school during the Mau Mau War, which claimed more than 10,000 lives in the uprising.

In America, many just want to experience a Mass celebrated by the renowned spiritual leader.

“We look at him as our religious father,” Mr. Ngana said. “We look at it like when a father visits his children who are very far away. We want to show him what we’ve done.”

Mr. Ngana and his fellow St. Matthew parishioners have worked tirelessly to plan the trip, which will include the noon Mass on July 5. There will also be an 11 a.m. Mass July 6 in English.

“We’re doing everything you possibly can to prepare for a visit from a cardinal,” Father Muth said.

St. Matthew has some 1,000 families representing 42 nations. About 50 families are from Kenya.

“It’s an ongoing effort,” he said, “to talk about and help them see the larger picture of the Church and the world.”