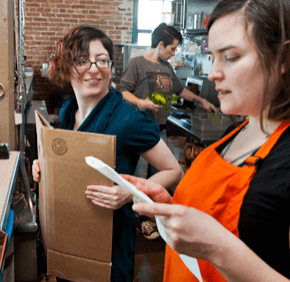 By Maria Wiering
mwiering@CatholicReview.org
If she gets sick, Amanda Rothschild, 29, doesn’t have to choose between missing work and paying bills.
Charmington’s, a 3-year-old coffee house in Baltimore’s Remington neighborhood where Rothschild is an employee-owner, offers paid sick leave to its 15 staff members. Rothschild said the leave is a rare benefit in the food industry, but it’s one that makes sense – both for an employer and employee.
Legislation before the Maryland General Assembly aims to make that practice widespread among low-wage earning positions. Backing that bill is the Maryland Catholic Conference, which advocates for public policy on behalf of the state’s Catholic bishops.
The bishops advocated for the policy in a statement released Jan. 20. Titled “The Dignity of Work,” it stated “the majority of Maryland’s low-wage workers have no access to paid sick leave, leaving them to choose between coming to work sick or losing a day’s wage. It is in the best interests of all to enact reasonable policies that keep our workplaces healthy by allowing workers to stay home when they or their dependent family members are sick, without undue penalties.”
The MCC is asking Catholics to urge their representatives to support the Earned Sick and Safe Leave Act, which is expected to be introduced soon. State Del. John Olszewski Jr. (D-Baltimore County) and Sen. Catherine Pugh (D-Baltimore City) are expected be the bill’s primary sponsors in their respective chambers.
Olszewski sponsored the bill last year, when it did not make it out of committee.
According to the Job Opportunities Task Force, a Baltimore-based nonprofit that advocates for policies to improve work opportunities for low-income workers, more than 80 percent of the state’s low-wage workers cannot earn paid sick days. The task force argues that mandated earned sick leave would better protect women, blacks and children – the groups most vulnerable to the effects of lost income under the status quo, it said.
The current proposal would require that employees earn at least one hour of paid sick time for every 30 hours worked, up to a maximum of seven days for full-time employees. In addition to taking sick time for themselves, workers could use that leave to care for sick family members or get out of an abusive situation.
While opponents charge the proposal could cause businesses to reduce workforce or drive up costs, Rothschild argues that paid sick leave is good for business by improving worker retention and public health. Many low-wage workers are in food service and risk others’ health when they can’t afford to take unpaid leave, she said.
“It’s treating employees as an asset of your business, rather than an expense,” she said.
Like most of his co-workers, Mike Dobson, 21, never had paid sick leave before joining Charmington’s staff last year. He has yet to use it, but said it means good health and better well-being for himself and his colleagues, and it makes him feel valued as an employee.
Chris Ross, MCC’s associate director for social concerns, said that it was important to codify the policy in law, rather than leave the decision to employers.
“While there are a lot of employers out there that are doing this for them (their employees), there are others that don’t. For workers who are faced with this, we care about their situation and we can support a policy that would help them care for their family,” he said.
For Rothschild – and the state’s bishops – paid sick leave is about more than the economic and health incentives. It’s a matter of social justice.
“It is a really important public humanity issue,” she said.
To read “The Dignity of Work,” which also advocates for raising the minimum wage, visit mdcathcon.org.
Lobby Night
The 30th annual Catholic Lobby Night will be held Feb. 17 from 3 to 8:30 p.m. in Annapolis, beginning at St. John Neumann Mission Church. Catholics will receive briefings on legislation important to the state’s bishops before meeting with lawmakers.
The event is free, but registration is required. For more information or to register, call the Maryland Catholic Conference at 410-269-1155 or visit mdcathcon.org.
Also see:
Catholic leaders stand with governor, mayor to call for minimum wage hike
Religious mark World Day for Consecrated Life
PrevNext