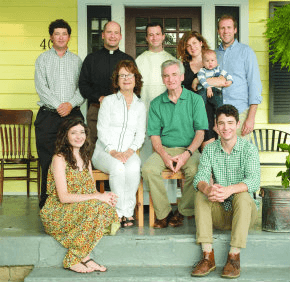 By Jennifer Williams
jwilliams@catholicreview.org
Dominican Brother Justin Bolger comes from a musical family.
His parents, Brian Sr. and Barbara, met in the folk group at St. Boniface Church in Sea Cliff, N.Y., where they both lived.
When his brother, Father Jesse Bolger, was an infant, the brothers’ musically inclined parents would place him in a guitar case on the altar of St. Vincent de Paul Parish in Cobleskill, N.Y., where they led the folk group. Father Bolger, who currently serves as administrator of St. Clare Parish in Essex, sings and plays guitar.
“My mom’s a great singer,” said Brother Justin, who grew up in St. William of York Parish in Baltimore and later transitioned to St. Peter in Libertytown, when his family moved to Frederick. “She’s creative and a great encourager as well.”
His father, who works for NASA, is a songwriter who also wrote the musical, “The Miracle of Tepeyac,” which tells the story of Our Lady of Guadalupe and which the family performed at a handful of churches.
Coming from such a music-infused family, it’s little wonder that Brother Justin and his sister Maggie teamed up to write, record and perform a mixture of folk/rock/pop/Indie music – even landing a record deal with RCA/Victor. They traveled the country as Judd and Maggie, performing and recording.
“It was great,” Brother Justin said of being in the music industry, although he acknowledged it was difficult to sustain a career.
As instrumental as music has been in Brother Justin’s life, the 34-year-old felt called in a different direction.
While living in Nashville, Brother Justin and his sister often went to Compline, or night prayers, with the Dominican Sisters.
“I started thinking about my vocation, what I was called to do,” said Brother Justin, who is one of seven Bolger children. “I felt like I should give religious life a shot.”
When he returned to Maryland, Brother Justin took a job as the director of music ministry at Mount St. Mary’s University in Emmitsburg. He participated in a “Come and See” vocations weekend at the Dominican House of Studies in Washington, D.C., and entered the novitiate for the Dominicans in July of 2012. He is currently in formation for the priesthood.
“It’s a beautiful life that we have here,” Brother Justin said. “It’s marked by the fraternity that we share. It’s a really full life.”
Brother Justin said that by the world’s evaluation or standard, it may seem strange to have two vocations in a modern-day family, but this is something both he and his brother came to by prayer. He said his parents are “really faith-filled people who respected their children’s freedom.”
“As you look at the Gospels, it is interesting to note that of the 12 apostles, Jesus chose two sets of brothers (Peter and Andrew, James and John),” said Father Jesse Bolger in an email exchange with the Catholic Review. “So the fact that there are two vocations to the priesthood from our family of seven children has great Biblical precedent.”
Father Bolger noted that his brother Brian has six children while his sister Maggie is expecting her second child.
“I like to tell my parents that, as a priest, I give them spiritual grandchildren through baptism,” he said.
While Father Bolger acknowledges he would love to have Brother Justin serving with him, he respects his brother’s decision “that he feels called to the Dominican life and charism of teaching and serving within his community, as a priest.”
Brother Justin has enjoyed his time with the Dominicans, attending Mass with the other students, brothers and priests, playing music and sports, and appreciating the academic life.
Because of his extensive musical background, Brother Justin was invited to edit a new album produced by the Dominicans and released by Dominican Records, “In Medio Ecclesiae.”
Listen to a sample of the music below.
The album, a first for the Dominicans, features a variety of music, including a chant from the feast day for St. Thomas Aquinas, a famous Dominican.
Brother Justin is inspired by a quote from the Constitution on the sacred liturgy, Sacrosanctum Concilium. “The musical tradition of the universal Church is a treasure of inestimable value, greater even than that of any other art.”
To order a copy of the Dominicans’ CD, visit: https://tinyurl.com/Dominicancd
Also see:
Candle-lit vigil pays tribute to victims of Columbia Mall shooting
Cardinal O’Brien sees pope driving change
Fun with science: Cathedral School holds science day for students
PrevNext