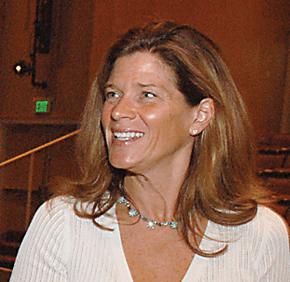 By Matt Palmer
mpalmer@CatholicReview.org
Maryland First Lady Katie O’Malley has apologized for calling members of the House of Delegates who opposed voting on changing the definition of marriage in 2011 “cowards.”
A bill that would have legalized same-sex marriage in Maryland was never voted on in the House of Delegates after passing in the Senate last year. The bill was returned to the House Judiciary Committee after a lengthy debate.
O’Malley created a firestorm Jan. 26 at the National Gay & Lesbian Task Force’s annual Creating Change conference in Baltimore when making the comments about the House of Delegates.
“We didn’t expect the things that happened to the House of Delegates to occur, but sadly they did, and there were some cowards that prevented it from passing,” Katie O’Malley said.
O’Malley also made comments about how religious organizations should not be involved in the debate.
“We’re all very diverse and that’s what makes us strong, but religion should never play a part in what the laws of our state are, and that’s what we’re trying to convey to religious leaders who are opponents of the bill,” she said, according to reports.
O’Malley’s husband, Gov. Martin J. O’Malley, a Catholic, is sponsoring a bill in the current legislative session to legalize same-sex marriage despite requests from Cardinal-designate Edwin F. O’Brien to reconsider.
After word leaked out that Katie O’Malley made the comments, she was roundly criticized throughout the state. It forced her to release a statement the morning of Jan. 27.
“I regret my recent choice of words at the Creating Change Conference last night,” she said. “I let my feelings get the better of me. I deeply respect that there are strongly held and differing views on marriage equality in Maryland, but hope that our state’s elected officials will come together to fairly address this important issue for our families and children.”
She continued: “We all want the same thing for our kids – we all want our children to live in loving, stable, committed households that are protected equally under the law. No child should be punished because he or she happens to live in a state that doesn’t recognize the love that his or her parents share. It’s about equal rights for everyone, no matter who they are, or who they love.”
The Maryland Catholic Conference, the lobbying arm of the bishops who lead the state’s Catholics, has been actively opposing the proposed bill. Cardinal-designate Edwin F. O’Brien has contacted an estimated 10 different delegates in an effort to preserve traditional marriage between a man and a woman.
“It’s been not only our teaching but it’s been at the core of our Western culture for as long as anyone can remember,” the cardinal-designate said Jan. 26 during a press conference. “To think that a fiat of a legislature can turn that over without damage being done is naïve and highly political.”
Mary Ellen Russell, executive director of the MCC, bristled at O’Malley’s comments and defended the House of Delegates.
“It’s completely ironic that anyone would call legislators who stood up for traditional marriage cowards,” Russell said. “It took extraordinary courage on their part to withstand the arm-twisting and political pressure that they were under last year, and it will take the same kind of courage and even more this year.”
Russell took umbrage with O’Malley’s comments on religion.
“The participation of the religious community in our political process has always been of paramount importance in promoting laws that are just and supportive of the common good,” Russell said. “Do we think that our voice on behalf of the poor, the church voice in favor of repealing the death penalty, in favor of the interest of the unborn, of the immigrant and for so many other moral values should be silenced?”
A rally in support of traditional marriage will be held Jan. 30 at 6 p.m. in Annapolis at Lawyer’s Mall. It is sponsored by the Maryland Marriage Alliance.
George Matysek Jr. contributed to this story.
PrevNext