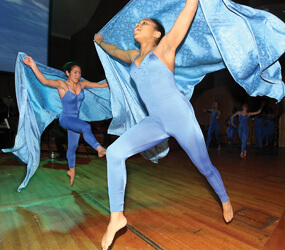 Eighth-grader Ashley Fitzpatrick once had the opportunity to sing on the stage of the Joseph Meyerhoff Symphony Hall with her St. Clare School classmates, but she was out of town.

The Essex student wasn’t about to let her second chance to shine in Baltimore’s spotlight slip away. Ashley joined hundreds of Archdiocese of Baltimore students as part of the Celebration of the Arts which showcased their musical, writing and artistic talents March 23.

“I think it’s great because we’re all younger and can prove to adults we’re just as important as they are,” Ashley said. “We love to do what we’re doing.”

The theme of the night, “Journeys,” was reflected in the months of preparation for the event. Budding musicians auditioned last fall to be part of the instrumental and choral presentations, while rising artists submitted their masterpieces for judging.

The fourth annual event drew an estimated crowd of 1,600 to the Meyerhoff. Families and supporters appreciated statues, drawings and paintings displayed in the lobby.

During the two-act presentation inside the auditorium, audience members were treated to song, dance and the spoken word that reflected the diversity of Baltimore and America. Students even told their own stories of how their grandparents and parents fought to establish a life for their families in the country.

Prior to the show, Archbishop Edwin F. O’Brien was presented a flag that was flown by helicopter over Afghanistan. Formerly the archbishop for the Military Services, he was touched by the presentation and said the students had religious forbearers.

“You go anywhere in the world, in Europe, you see where the culture is and where the arts are,” the archbishop said. “You find them in a church or in a museum. It’s our special heritage as Catholics.”