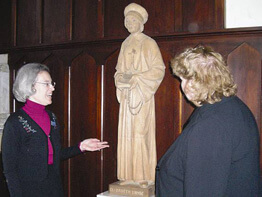 When people walk in the same footsteps as the founder of the Oblate Sisters of Providence whose canonization is currently under review, they are not taking a tour but are participating in a pilgrimage.

Sister Mary Virginie Fish, O.S.P., insists the Mother Mary Lange Pilgrimage in and around Baltimore be called just that.

“It’s not a tour,” Sister Virginie said emphatically. “This journey is a prayerful excursion one takes in a spirit of penance and reflection, which is indeed the true definition of a pilgrimage.”

An average of 12 groups request a pilgrimage annually to learn about Mother Mary Elizabeth Lange, the Caribbean-born woman who helped establish St. Frances Academy in Baltimore to educate black children, and the Oblate Sisters of Providence – the Catholic Church’s first order for African-American women religious – in 1829.

The Mother Mary Lange Guild holds three different kinds of pilgrimages to educate people about the woman they hope will one day be canonized. There is a one-hour introductory visit at the Oblate Sisters’ Motherhouse, a three-hour excursion visiting three of the historic places, and the full-day expedition visiting nine sites made holy by the presence and deeds of Mother Mary Lange.

Highlights of the pilgrimage include the Mount Providence Convent in Catonsville, which houses personal and authentic artifacts and memorabilia; the Chapelle Basse on Paca Street in Baltimore, where both Mother Lange and St. Elizabeth Ann Seton worshiped; St. Frances Academy, the oldest black Catholic school still in operation and the site of Mother Lange’s death; and prayers at her gravesite at the New Cathedral Cemetery in West Baltimore.

Groups wishing to participate in a pilgrimage should contact the Mother Mary Lange Guild office at 410-242-6861 at least two months in advance.