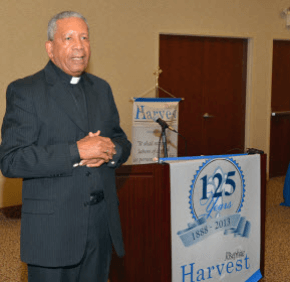 By Kyle Taylor
Special to the Review
A celebration in Baltimore honored an unprecedented run of a magazine that has highlighted the struggles and achievements of blacks in the United States.
The Josephites – formally known as St. Joseph’s Society of the Sacred Heart – celebrated the 125th anniversary of The Josephite Harvest, the official magazine of their order, with a special Mass at the Basilica of the National Shrine of the Assumption of the Blessed Virgin Mary in Baltimore Nov. 2.
It attracted about 130 people, including members of the Oblate Sisters of Providence, 20 priests of the Josephite order and Archbishop William E. Lori.
The Harvest is the oldest continuously published Catholic mission magazine in the United States.
Originally published as The Colored Harvest from 1888 until 1960, it began as an annual publication. Over the course of the magazine’s history, it has gone from a bimonthly periodical to a quarterly.
What has not changed, however, is the magazine’s coverage of topics relevant to African-Americans and giving voice to the mission of the Josephites. The magazine’s relevance to African-Americans has not changed either.
“The Harvest has been a source of encouragement to keep giving witness to Gospels, and to develop leadership in the church and in families,” said Father William Norvel, superior general of the Josephites, who preached the homily.
“The Harvest has highlighted those roles. It started as a way to highlight activities of the Josephites. Our ministry to African-Americans is still very strong, and The Harvest is a means we’ve used to make it known to African-Americans and the church what we’re doing.”
The Harvest has covered a number of issues that blacks have confronted as the United States changed over the years, including passage of the Civil Rights Bill, the end of segregation and the 1963 March on Washington. Father Norvel emphasized these historic moments in his homily.
“(The Harvest) has documented the growth, struggles and accomplishments of blacks in the United States, particularly black Catholics, and it has documented the courageous and visionary work of our priests and brothers over the years,” he said, noting the magazine’s survival is a testament to its importance to black Catholics.
Father Norvel is the first African-American superior general of the Josephites, an achievement that he noted as a symbol of progress.
Such an appointment would have seemed improbable, to say the least, when the Josephites were first established in Baltimore in 1871. Founded after the Civil War to minister to newly freed slaves, the Josephites are the only community of men in the American Catholic Church that exclusively services the black community.
Archbishop Lori, celebrant of the Mass, felt the story of the Josephites was an important one that needed to be told.
“The Josephites got their start here and really pioneered ministry to and among African-Americans in parishes and schools, and they continue to do so,” the archbishop said. “The Archdiocese of Baltimore is unthinkable without their presence. They’ve led the way for racial and social justice in a way that befits a Christian community. And it’s not just in the past, it’s ongoing.”
The Josephites’ presence is evident across the country – 41 parishes and schools in seven states and Washington, D.C., including four parishes in Baltimore: St. Francis Xavier, St. Peter Claver, St. Pius V and St. Veronica, according to their website.
Father Norvel and the Josephites want to accomplish even more than they already have. Stating that the “harvest is great, but the laborers are few,” he acknowledges that the dearth of African-American priests is an obstacle, and that more young men are essential to the growth of the Josephites.
“We don’t have the manpower,” Father Norvel said. “It’s time for us to start getting them from our own parishes. Our parishes need to foster desire. We need to get young men from America and Nigeria. We need to increase our society so that we can minister to more.”
Also see:
St. Ignatius Loyola Academy celebrates 20 years of transforming lives: Read one man’s story
Her faith takes her from Bel Air to  Mississippi to Southbend
PrevNext