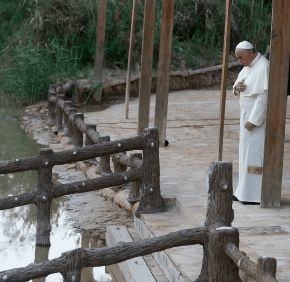 By Judith Sudilovsky
Catholic News Service
JERUSALEM – UNESCO declared Bethany Beyond the Jordan, on the eastern side of the Jordan River, as a World Heritage site and the location of Jesus’ baptism.
“The decision is logical. The Eastern side is where all the Byzantine antiquities and churches are located,” said Franciscan Father Eugenio Alliata, professor of Christian archaeology at Jerusalem’s Studium Biblicum Franciscanum. He said pilgrimages to the Western side began only about 600 years ago. “But for us it is the Jordan River, the middle, which is the most holy place.”
For years, Israel and Jordan have been at odds as to which side of the Jordan River is the actual site of Jesus’ baptism, as both sides vie for the title to increase tourism. Israel upgraded its shoreline with changing rooms and a wooden deck access to the murky waters, while Jordan’s eastern shore has remained a sleepy site despite two papal visits.
Father Alliata said ancient iconography shows Jesus in the middle of the river rather than on any of the two shores, and there are accounts by ancient pilgrims of marble columns in the middle of the river marking the site of Jesus’ baptism.
“History has different ways of being remembered,” he said. “If there was an agreement between Israel and Jordan (on the issue) they could combine the place East and West. Both have importance, the East in ancient times and the West in modern times.”