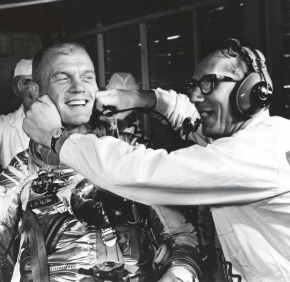 By Catholic News Service
COLUMBUS, Ohio – Astronaut legend and decorated World War II pilot John H. Glenn, who served for 24 years in the U.S. Senate and inspired young people to pursue careers in sciences and engineering, died Dec. 8. He was 95.
Born in Cambridge and raised in nearby New Concord, Glenn was propelled to fame after being one of seven military test pilots chosen as the country’s first astronauts. He was the third American in space and the first to orbit earth when he flew aboard the Mercury Friendship 7 capsule, traversing the globe three times in a flight that lasted just less than five hours Feb. 20, 1962.
Among those watching Glenn’s first space flight was St. John XXIII, who asked to be kept regularly informed about the progress of flight.
Glenn became the oldest man to fly in space, when at age 77 and still a senator, he blasted into orbit on the Space Shuttle Oct. 29, 1998, after lobbying the National Aeronautics and Space Administration for two years that he could serve as a “guinea pig for geriatric studies.”
While on the fourth day of the mission, Glenn, a Presbyterian, said, “I pray every day. To look out at this kind of creation out here and not believe in God is, to me, impossible. It just strengthens my faith.”
Archbishop Tarcisio Bertone, then-secretary of the Congregation for the Doctrine of the Faith, praised Glenn the day after the shuttle took off. “Just think of it,” the archbishop said. “A man as old as the pope is now orbiting the world.”
The phrase “Godspeed, John Glenn” was in common use for both missions.
Glenn died surrounded by family at Ohio State University Wexner Medical Center, where he been hospitalized for about a week. His wife of 73 years, Annie, was with him.
In a guest sermon, Glenn told a Virginia Presbyterian congregation that the “orderliness of the whole universe,” from the structure of atoms to the arrangement of galaxies, was “one big thing in space that shows me there is a God, some power that put all this into orbit and keeps it there. It wasn’t just an accident.”
Glenn later told a Senate subcommittee he thought it would be foolish to assert that God could be pinpointed to “one particular section of space.” “I don’t know the nature of God any more than anyone else, nor would I claim to because I happened to have made a space ride that got us a little bit above the atmosphere,” he said. “God is certainly bigger than that. I think he will be wherever we go.”
After his astronaut career, the former Marine Corps pilot started a career in business, but subsequently turned to politics, becoming a senator representing his home state in 1974. He served four terms before retiring in 1999. His Senate tenure included the chairmanship of the Senate Committee on Governmental Affairs. He also served on the Senate Intelligence Committee, Foreign Relations Committee, Armed Services Committee, and the Special Committee on Aging.
Reaction to Glenn’s death came from across the country.
NASA immediately posted a tribute on its website to the space hero after his death was announced. The space agency had renamed its Lewis Research Center in Cleveland the John H. Glenn Research Center at Lewis Field in 1999.
President Barack Obama, who awarded Glenn the Presidential Medal of Freedom in 2012, said in a statement that the country had lost an “icon.”
“John always had the right stuff, inspiring generations of scientists, engineers and astronauts who will take us to Mars and beyond – not just to visit, but to stay,” Obama said.
“The last of America’s first astronauts has left us, but propelled by their example we know that our future here on earth compels us to keep reaching for the heaves. On behalf of a grateful nation, Godspeed, John Glenn,” the statement concluded.
The son of a plumber, Glenn flew 59 combat missions in the South Pacific during World War II, taking direct hits several times but always returned to his airbase. He also was assigned to fly a jet interceptor in the Korean War. For his 149 combat missions in both wars, he was presented the Distinguished Flying Cross six times and the Air Medal with 18 award stars.
He was a winner of the Legion of Honor medal, the highest award of the Four Chaplains Memorial Foundation, an interfaith organization dedicated to four Army chaplains who died together in World War II.
Glenn also completed the first supersonic transcontinental flight, from California to New York, in 1957.
On the eve of his retirement from the Senate, Glenn placed fifth among the world’s most admired men in an annual Gallup poll, placing behind only President Bill Clinton, St. John Paul II, evangelist Billy Graham and basketball star Michael Jordan.
After politics, he founded the John Glenn Institute for Public Service and Public Policy, now known as the John Glenn College of Public Affairs at Ohio State University. He taught at the school as an adjunct professor.
Funeral arrangements were incomplete Dec. 9. Besides his wife, Glenn is survived by two children, David and Carolyn Ann, and two grandchildren.