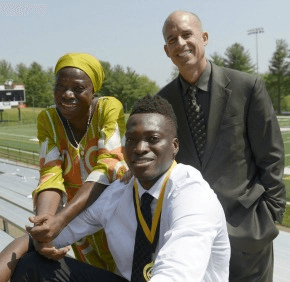 BEL AIR – Felicia Ikpum is profoundly grateful that her son’s fellow members of the Class of 2016 and their teachers made it possible for her to travel from Africa to reunite with him for the first time in four years – but not all that surprised, seeing that he attended a Catholic high school.

“Spiritually, morally, socially, I am happy that he came here,” she said. “He has not forgotten his prayers.”

Mike Tertsea has said plenty over his four years at The John Carroll School in Bel Air. He was among its 177 graduates May 28, at a commencement exercise witnessed by his mother.

The previous day, the two talked about the charity and hope they encountered at the school, and how it reinforced their already considerable faith. The silver chain around Tertsea’s neck held a cross. She wore a rosary around her neck.

The objective of his senior project “was to portray the culture of my country, Nigeria, and let people know the life that occurs there.” The nation of 184 million is easily the most populous in Africa. He is from a village near Makurdi, a city of 151,000 that is the capital of Benue State.

His mother worships at St. Martin Catholic Church, was taught in primary school by the Sisters of Nativity, and still speaks fondly of a Sister Leontia. Ikpum went to Queens College in Gboko, and works in an immigration office, a position that led her to think long and hard about her son’s education and future.

“Even the Muslims (in Nigeria) want their children to go to Catholic schools,” said Ikpum, who accepts his physical absence from her life. “He should stay here. The terrorism, the Boko Haram …”

Michael Tertesa’s host parents and mother (far left in green) cheer and wave in the stands as Michael is awarded his diploma at John Carroll’s graduation. (Kevin J. Parks/CR Staff)

Tertsea was one of 40 eighth-graders at Our Lady of Perpetual Help School in Makurdi, but already noticed, as he stood 6-foot-7 by the time he was 11. A cousin in Philadelphia helped the basketball novice find his way to a scholarship and John Carroll.

Now 6-10, he earned honorable mention on the BCL all-star team, but played like a first-teamer in the tournament championship game, when he blocked five shots as John Carroll defeated Mount St. Joseph High School. He will remain in the U.S., having secured a basketball scholarship to the University of Rhode Island.

Tertsea came to John Carroll to play for coach Tony Martin, who upgraded John Carroll to the BCL and guided it to three titles. He is also moving on, to Cape Fear Academy in Wilmington, N.C.

According to Tertsea, whose father abandoned his mother he was a young child, Martin did more than develop him as a basketball player.

“Where I grew up, with a father who left when I was young, I was scared when I got here, I had trust issues,” Mike said. “He is not only a great coach, but a father to me. He’s the reason I’ve become the person I am. He made a very real difference in my life.”

Michael Tertsea poses with his mother, Felicia Ikpum, at his graduation from The John Carroll School in Bel Air. (Kevin J. Parks/CR Staff)

Months after his first flight on a jet, Tertsea accompanied the Patriots during the Christmas break to a tournament in Hawaii.

His host family, George and Shari Doherity, have provided a second home. He has a fondness for sausage pizza, and his Americanization has occurred to the extent that his mother said “he hasn’t touched” any of the beans, fish and other specialties she brought from Nigeria.

Tertsea and his mother have shared the story of their hundreds of benefactors at John Carroll with WMAR-TV’s Jamie Costello, the Aegis and the Washington Post.

The effort was spurred on by Kishan Patel, a fellow member of the class of 2016, wrote a compelling account of Tertsea’s journey for a winter issue of The Patriot.  After learning of the poverty and terrorism he left behind in Nigeria, his classmates conspired to bring his mother here for his graduation.

Patel and his classmates raised $1,763 toward Ikpum’s airfare, and the remaining $500 was given by John Carroll teachers, after senior class co-advisor Carrie Siemsen alerted the faculty of the need.

“We’re not a great class because of smarts, or athleticism, or because we’re well-behaved,” Patel said. “We’re all those things, but we’re great because we care about each other.”

A first-generation American who worships at a Hindu temple in Reisterstown, Patel cited the way in which Tertsea and the other international students at John Carroll have enriched the fabric of the school.

“Minjeong Kim is going to Cal Berkeley,” said Patel, who will begin a 7-year track to become a dentist at Gannon University in Erie, Pa. “You sit with her in physics class, and listen to her, it’s a new way of learning.”

Tertsea’s lessons at John Carroll now include a most memorable one in mercy.

“Going to a Catholic school meant so much,” Mike said. “We are known for helping each other out.”