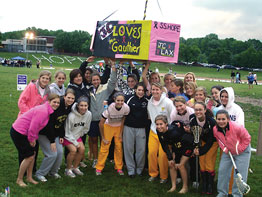 Fifty members of The John Carroll School community came together last month in celebration and hope for Tess Gauthier, a faculty member and coach who is taking on her greatest battle yet: breast cancer.

An avid athlete and a 1971 graduate of the Bel Air school, Gauthier, an instructor in health and physical education, and field hockey and badminton coach, was diagnosed with cancer in February. Her course of treatment includes six rounds of chemotherapy and surgery in July, followed by radiation therapy.

While treatments are a large part of Gauthier’s reality, she remains an active member of the John Carroll community, a tremendous support to her and her family.

On May 16-17, members of the school joined in a locally sponsored Voyage of Hope and Relay for Life, the American Cancer Society’s signature event.

With the theme of “Celebrate – Remember – Fight Back,” the overnight “walk” is designed to gather people who have been affected by cancer.

During the fundraiser, designed to promote research and awareness, the participants took turns walking and running around the Joppatowne High School track throughout the night and into the early morning.

To date, John Carroll for Gauthier has raised more than $7,000. Donations continue to come in, ranking the school as the team with the second highest cumulative dollar amount raised among 37 that participated in the Southern Harford County Relay for Life.

During John Carroll’s spring sports banquet May 22, Gauthier asked her colleagues for the opportunity to give the opening prayer.

“I wanted to pray and share my thoughts about adversity,” Gauthier said. “When you’re an athlete, you have this internal drive, this fight within you to battle those internal battles.”

Gauthier went on to say that the school’s support, consistent presence and the students’ sense of connection has been a marvelous strength for her. “Kids will see me in school and not just ask how I am, but instead, they will ask with greater conviction and empathy: How are you feeling today?; Are you having a good day?; and, How are your treatments going?

Gauthier said it has been good for her teams to see her battle the cancer over the last several months.

“Teaching life lessons has always been a part of who I am,” said Gauthier.

Whether it’s been as a wife, mother, teacher, coach or friend, Gauthier is a role model for her students and athletes alike as she continues her own daily voyage of hope.