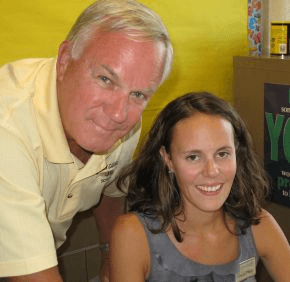 BEL AIR – The teacher in front of room 105 will seem vaguely familiar when the 2015-16 school year begins at The John Carroll School Aug. 31.

Teresa Pleiss graduated from John Carroll in 2004. She is the daughter of Al Ward, class of 1970, who occupied that same classroom for most of the 38 years he taught math at the only Catholic high school in Harford County.

“He taught me right in this room, Algebra II,” Pleiss said. “He was vowing to clean out his room, but left me lot of things. He thinks I’m going to do everything his way. … I will, but with my own spin.

“This place has been a big part of my life, and my family’s. We’ve had somebody either teaching here or attending as a student since the school opened.”

That began with an uncle, Ben Von Paris, class of 1968. It includes her mother, Beth Von Paris Ward, ’74, and an aunt, Anne Von Paris McMahon, who works in marketing. The line includes more aunts, uncles, cousins and one sibling, Kristin, ’02, but it seems that no one put more into John Carroll than her father.

Al Ward didn’t just teach, he coached football for eight years and baseball for 12, and was the de facto social director for the faculty. That’s one job he will retain, as principal Madelyn Ball gave him approval to continue organizing the January bus trip to Atlantic City.

Just about every Wednesday in the summer, the “Crabby Guys” – fellow JC retirees Lyle Brennen and Joe Iacchei, and current teachers George Appleby and Mike Gaudreau – board the “RelationShip,” the 27-foot boat Ward moors on Seneca Creek, for a crossing of Middle River to a crab house on Sue Creek.

He and his wife have also been part of the fabric at St. Stephen Parish in Bradshaw, where she taught religious education for two decades, and he served on the school board for six years.

Ward, it seems, has always done whatever it takes. His classmates at John Carroll included Al Neville, who would quarterback the University of Maryland, so it didn’t take many football practices for Ward to find another position.

Ward delivered The Sun in Perry Hall, most notably to the home of Orioles’ manager Earl Weaver, from seventh grade at St. Joseph School in Fullerton through his days at  Towson University. He sat down to chat at the Perry Hall Swim Club, where he has worked since the 1960s, a must when his teaching salary at St. Stephen School was $5,250.

This is not the first time he has handed over the reins to his daughter. Pleiss began working summers at the swim club when she was 14, and in 2009, took over operation of the club from her father.

“This is the icing on the cake,” Ward said of his daughter replacing him on the John Carroll faculty. “It’s a compliment to a parent, to have a child want to follow in your footsteps.”

She has a bachelor’s degree from Salisbury University and a master’s from Loyola University Maryland; brought James, 4, and Elizabeth, 1, into the world; and taught for seven years at Middle River Middle School.

“This place made me who I am,” Pleiss said, of the opportunity to return to John Carroll. “Beyond the academics, you become a whole person.”

Pleiss played field hockey and lacrosse, was vice president of her junior class, and active in theater, saying, “I was never the star, always in the chorus, but that’s the point, everyone gets involved.”

“My first memory here is going to a baseball game my dad was coaching. I remember being at St. Stephen School, and dad recruiting me to be one of the orphans in ‘Annie’ here. It’s neat that I’m working alongside some of the people who taught me, but they weren’t just my teachers; they’re my dad’s friends.

“He loves John Carroll. He’ll recruit anyone, tell them, ‘this is the place you should go.’ ”

“I don’t know,” Pleiss said. “My husband, Rob, went to Calvert Hall, and might have something to say about that.”

The nicest crossing guard ever