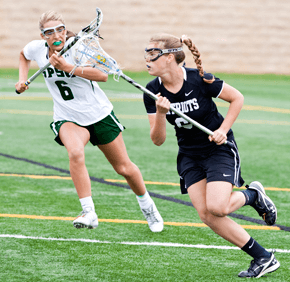 By Elizabeth Lowe
elowe@CatholicReview.org
Twitter: @ReviewLowe
Mackenzie Rayburn focuses on her studies first, then sports.
“I have to make time for my schooling,” said Rayburn, who graduated from The John Carroll School in Bel Air June 1. “That’s what will get me somewhere in life.”
Rayburn, who took advanced placement and honors courses and graduated with a 3.8 GPA, is a member of the National and Spanish National Honor societies.
At John Carroll, Rayburn was a member of the Spirit Club, which works to raise school spirit among students, and Athletic Leadership Group, an organization composed of student athletes who plan events including pep rallies and sports banquets.
“She has her academics and athletics and everything in perspective, which I like about her,” said Tess Gauthier, a physical education and health teacher at John Carroll, and Rayburn’s adviser.
Rayburn captained the J.V. lacrosse team her sophomore year and the varsity field hockey team her senior year.
“That was a big honor, especially because we voted for captains as a team,” she said.
She played varsity field hockey for three years, and varsity lacrosse her junior and senior years. She also played lacrosse for a local club team throughout high school.
“I played lacrosse longer so it was my main sport,” said Rayburn, who has been playing for about 11 years. “Field hockey was something I did for fun.”
During her sophomore year Rayburn received an award from John Carroll celebrating her athletic abilities, leadership, sportsmanship and enthusiasm.
“It was really nice to receive that award and know my hard work was appreciated,” she said.
“Mackenzie exemplifies what we try to have in a student athlete here at John Carroll,” said Larry Dukes, John Carroll’s athletic director, who noted Rayburn’s academic achievements and commitment to sports. “She’s displayed her leadership all around school.”
The 18-year-old will head in the fall to St. Mary’s College of Maryland in St. Mary’s City, where she will play lacrosse. She plans to major in elementary education and aspires to be an elementary school teacher.
“I’m looking forward to the opportunity to play (lacrosse) with a new group of girls, learning and growing as an athlete and as a student,” she said.
A parishioner of St. Margaret in Bel Air, Rayburn cherishes her faith.
“It’s something that’s always been important to me,” Rayburn said. “It’s important to know you have a strong faith and God is looking out for you.”
Mackenzie Rayburn
The John Carroll School
Senior
Credentials: Parishioner of St. Margaret in Bel Air; member of the National and Spanish National Honor societies; member of the spirit club and Athletic Leadership Group; played varsity field hockey and lacrosse; will play lacrosse at St. Mary’s College of Maryland
Also see:
St. John’s Catholic Prep grad received values-based education
Bishop Walsh senior keeps focused
Catholic High sophomore’s involvement keeps her on her toes
Cristo Rey senior grows in faith
St. Frances Academy junior running full steam ahead
St. Mary’s senior shares his faith
Mercy senior makes waves overseas
IND senior is committed to service
Mount St. Joseph senior is a team player
Mount Carmel senior is a faith leader
Goretti senior keeps involved
Quick turnaround for Spalding senior
Loyola junior sets example for peers
Seton Keough senior takes the cake
Calvert Hall’s Grace upholds family name
Copyright (c) June 8, 2013 CatholicReview.org
PrevNext