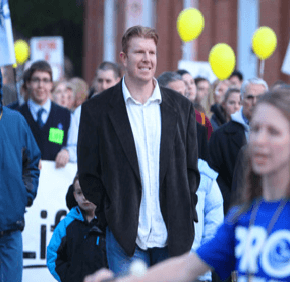 By George P. Matysek Jr.
gmatysek@CatholicReview.org
Twitter: @ReviewMatysek
Citing President Barack Obama’s recent call for God to “bless” Planned Parenthood, former All-Pro Ravens’ Center Matt Birk declined to attend a June 5 White House ceremony honoring the Super Bowl-champion Ravens.
In a June 6 interview with Minneapolis-St. Paul’s KFAN Sports-Radio FM-100.3, Birk said he had “great respect for the office of the presidency,” but could not endorse Obama’s statement “in any way.”
The president made the invocation during an April 26 speech at the Planned Parenthood Conference in Washington, D.C.
“Planned Parenthood performs about 330,000 abortions a year,” Birk said. “I am Catholic, I am active in the pro-life movement and I just felt like I couldn’t deal with that. I couldn’t endorse that in any way.”
While in Maryland, Birk was a featured speaker in the 2011 Maryland March for Life in Annapolis. More recently, he was an outspoken opponent of the state’s law legalizing same-sex marriage.
In a 2011 interview with the Catholic Review, Birk noted that when he was growing up in Minnesota, Planned Parenthood seemed like a permanent fixture in his community. Located just two miles from his home in St. Paul, the abortion clinic operated for three straight decades before it closed after the godfather of one of Birk’s six children opened a pro-life pregnancy resource center across the street. Adrianna, Birk’s wife, volunteered at the pro-life center.
While the Planned Parenthood clinic was operating, people of faith prayed regularly for women and their unborn children – participating in sidewalk counseling and providing help for women to bring their children to term.
Birk, who attended Mass at Sacred Heart in Glyndon and the Catholic Community of St. Francis Xavier in Hunt Valley while playing for the Ravens, earlier told the Catholic Review that life is a gift from God. He recalled being overwhelmed when he held his first newborn child in his arms.
“It was unbelievable the love that I felt for her,” he said, “and any parent knows exactly what I’m talking about. At that point, you know it’s not a choice. Life is a gift that’s given to us. We are supposed to accept it. It’s not our choice whether we decide a baby lives or not.”
The same day he announced his retirement from the NFL in February 2013, Birk visited St. Mark School in Catonsville and spoke with students.
June 6,2013 CatholicReview.org
PrevNext