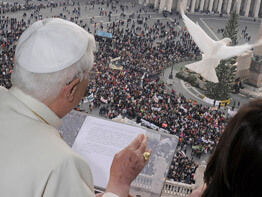 VATICAN CITY – Through his healings and miracles, Jesus showed that God is near and merciful to everyone, Pope Benedict XVI said.

“The novelty of Christ’s message is that in him God has come closer, that he already reigns in our midst as demonstrated by the miracles and healings he performs,” Pope Benedict said.

The pope spoke to thousands of pilgrims in St. Peter’s Square during his weekly Angelus address Jan. 27.

Together with two Italian children from Rome’s Catholic Action, the largest lay association of Catholics in Italy, the pope released two white doves from his apartment window as a symbol of peace.

The pope, who seemed pleased the doves took flight immediately, said: “Well done. Sometimes they fly back” inside the studio window.

He thanked the association’s young people for taking part in the annual dove-release tradition and praised their commitment to helping other children who suffer from war and poverty.

In his main Angelus address, the pope commented on the day’s Gospel reading in which Jesus called his first apostles and began his public ministry “curing every disease and illness among the people” and preaching “the kingdom of heaven is at hand.”

“What does this expression mean” that the kingdom of God or of heaven is near? the pope asked.

It is not heralding an earthly kingdom, he said, “it proclaims it is God who rules, that God is Lord and his lordship is present, current and being realized.”

God rules the world through his son and wherever Jesus goes, the Holy Spirit “brings life and people are healed of diseases of the body and spirit,” the pope said.

God’s rule “is thus manifested in a person’s complete healing,” he said.
Jesus, in fact, wanted to reveal God’s true face: a God who is nearby, “full of mercy for every human being, the God who gives us the gift of life in abundance, of his own life,” he said.

“The kingdom of God furthermore is life that asserts itself over death, the light of truth that dispels the darkness of ignorance and lies,” said the pope.
The pope also marked World Leprosy Day, encouraging those who assist the more than 200,000 people with Hansen’s disease, known formerly as leprosy.