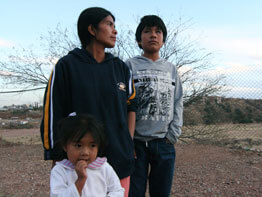 NOGALES, Mexico – When Leoba Marcos crossed the Sonoran desert earlier this year, she didn’t know what to expect.

She made her way in early January with a group of about 20, including her husband, 13-year-old son and 3-year-old daughter. It was the second time Mrs. Marcos had crossed the U.S.-Mexican border illegally.

This time, she crossed via Sonoita, a Mexican border town south of Lukeville, Ariz. The group, led by a smuggler, had walked about six hours before U.S. Border Patrol agents apprehended them.

“They were hiding,” Mrs. Marcos said, shaking her head. “We didn’t say anything and we didn’t run. They just took us to a detention center.”

The sisters are part of the Kino Border Initiative, a binational effort headed up by the California province of the Society of Jesus. The joint effort will staff a care center for a growing number of deported migrants, serve as a contact point for numerous humanitarian organizations working on the border and educate the community on immigration issues.

“The Kino Border Initiative is an important step in responding to the deportation of those who have been asked to leave the country – to make sure that their departure is safe, that they are cared for,” said Bishop Gerald F. Kicanas of Tucson, Ariz., during a Jan. 18 press conference at Sacred Heart Church in Nogales.

The initiative will work closely with the bishops of the Diocese of Tucson and Mexico’s Archdiocese of Hermosillo, as well as with Jesuit Refugee Service.

Jesuit Father John McGarry, California provincial, said the effort takes on the spirit of the man for whom it is named, Father Eusebio Francisco Kino, a 17th-century Jesuit missionary who served in Sonora.

“We Jesuits are committed to the poor, the immigrant, the disenfranchised,” he said. “The beginning of this new ministry and service to the church and to people in need is a concrete sign to that commitment.”

The initiative will study immigration on the border and document migrants’ stories from their journey to the border to their capture by the Border Patrol.

“The complex issue of immigration is first and foremost about people – God’s people and their lives, their dignity and their livelihood,” he said. The initiative “is designed to accompany the migrant people, especially those deported and alone, to serve them – to serve them and help them, particularly women and children,” he said.

Araceli Wedington tried entering the United States illegally when she was eight months pregnant. She was trying to make it back to her family in Kansas. Two of her children live there with her husband, a U.S. citizen.

Mrs. Wedington unexpectedly received divorce papers while she was in Mexico and hastened her return. She crossed alone.

When she came across a group, she would first hide and then follow at a distance. Wedington, who first crossed in Tijuana five years ago, knew that many border crossers are robbed and many women are raped.

At one point on the journey, Mrs. Wedington fell and, fearing she was going into labor, sat near a highway and waited for the Border Patrol to find her. She was taken to the hospital, but deported before having the baby.