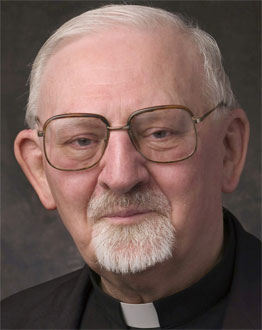 VATICAN CITY – While lacking the media attention and the pomp of a papal conclave, the election of the superior general of the Jesuits, known as the black pope, has its own rigid rules and ritual.

Father Peter-Hans Kolvenbach, 79, superior general of the Society of Jesus, has called for a general congregation of the 19,200-member order.

The meeting will begin Jan. 7 at the Jesuit headquarters in Rome, one block away from St. Peter’s Square.

While Jesuit superiors general are elected for life, the first order of business in January will be a formal vote on accepting Father Kolvenbach’s resignation, a novelty personally approved by Pope Benedict XVI.

As with a papal election, politicking is banned, there are no nominees going into the congregation and voting is preceded by formal presentations on the current state of affairs and future challenges and possibilities.

But unlike the cardinals in a papal election, the Jesuits had almost two years’ notice that they would be meeting to elect the 29th successor to St. Ignatius of Loyola. The advance notice gave them time to hold meetings in each province around the world to elect their delegates to the general congregation and to draw up proposals for the congregation to consider.

U.S. Jesuit Father Frank Case, secretary of the order, said that after Father Kolvenbach formally resigns at the beginning of the meeting and after the presentations on the current state of the Jesuits, there will be “four days of prayer and quiet, one-on-one conversations” among the 217 Jesuit priests chosen as electors by their peers.

The delegates are not allowed to campaign for anyone, although they can ask each other about the qualities they see in another Jesuit, Father Case said.

After the four days of prayer, the delegates gather to concelebrate a Mass of the Holy Spirit and then return to the congregation hall.

They sit in silence for an hour, praying, and then the voting begins. There are no nominations and no slate of candidates, just ballots cast for the man each delegate believes should lead the order.

When one candidate garners a majority of votes, the election is over.

But, Father Case said, the delegates are required to stay in the congregation hall until Pope Benedict has been informed of the election results and gives his consent.

Father Kolvenbach was elected on the first ballot in 1983, Father Case said.

In private conversations, most Jesuits are willing to guess who might be the next superior general, but all Father Case would say was that his confreres are most likely to look for a man who has “a multicultural background and is multilingual.”

For the Jesuits, the election of a new superior is only the beginning of the general congregation’s work. And, in fact, a date for the congregation’s conclusion will not be set until the delegates begin meeting.

Father Case said the congregation’s preparatory committee received more than 350 propositions from the provincial congregations held in the last year.

In looking at the Jesuit mission, at relationships among Jesuits, with their lay co-workers and with the wider world and at the structures of governance, Father Case said, delegates of the general congregation will be particularly mindful of the phenomenon of globalization.

He said the questions to be kept in mind are: “How can we minister to assuage its negative effects,” particularly on the poor, on the environment and on indigenous peoples?

Then, he said, there also is the fact that globalization brings rapid movement and communication, something that could be used to benefit relationships between individual Jesuits and their superiors and between provinces and the Jesuit curia in Rome.

Of course, he said, the continuing overall decline in membership – down about 3,000 since the last general congregation was held in 1995 – raises questions in areas from ministries to collaboration with laypeople and from formation to how provinces should be structured.

Father James Grummer, Father Kolvenbach’s assistant for the United States, said, “In spite of the declining number of Jesuits, a small number has been able to do a terrific amount of work because of cooperation with laypeople.”

In fact, he said, in the United States “we have moved from collaboration to partnership” by sharing Ignatian spirituality with laypeople and drawing on their experiences and expertise.