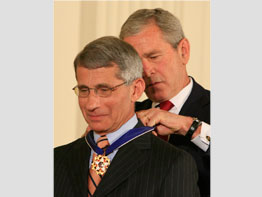 WASHINGTON – Dr. Anthony S. Fauci, an award-winning physician and AIDS researcher, was among six recipients of the Presidential Medal of Freedom June 19 in the East Room of the White House.

“Three decades ago, a mysterious and terrifying plague began to take the lives of people across the world. Before this malady even had a name, it had a fierce opponent in Dr. Anthony Fauci,” said President George W. Bush at the ceremony.

Fauci and two other Catholics – former Health and Human Services Secretary Donna Shalala and Gen. Peter Pace, former chairman of the Joint Chiefs of Staff – were among the six receiving the nation’s highest civilian honor.

The other honorees were Johns Hopkins Hospital pediatric neurosurgeon Dr. Benjamin S. Carson Sr.; Judge Laurence H. Silberman of the U.S. Court of Appeals for the District of Columbia; and the late Tom Lantos, a Holocaust survivor and Democratic congressman. Lantos’ widow, Annette, received the medal in his honor.

He highlighted Fauci’s work with the AIDS virus and his early education at two Jesuit schools – Regis High School in New York and the College of the Holy Cross in Worcester, Mass.

“And he still quotes what he learned from Jesuit teaching: ‘precision of thought, economy of expression,’“ President Bush said.

In a June 16 phone interview with Catholic News Service, Fauci attributed much of his perseverance and desire to serve others to his youth, particularly his Jesuit education.

“The Jesuit spirit is always permeated in service to others,” he said.

At Regis High School, Father Philip Judge, president, said in a June 16 phone interview that he was thrilled to hear of the award to Fauci.

Three years ago, the school awarded Fauci the John Francis Regis Medal. The award is given to a deserving alumnus each year in honor of his service, Father Judge said.

Fauci told CNS his time at Regis High School, where he graduated in 1958, was “one of the happiest experiences of my life.”

Thanks to his Jesuit education, both at Regis and Holy Cross, Fauci was more than prepared to face the challenges of researching the unknown “gay plague” or “gay cancer,” as what came to be called HIV/AIDS was commonly referred to when it surfaced among Americans and people around the world in the early 1980s.

Doctors thought then it was only prevalent among gays, until it was diagnosed in heterosexual men and women, drug abusers and babies, and they began to see it in people who had received blood transfusions.

Meeting the demands of his teachers set the stage for Fauci to tackle the rigors of research.

“When you live that, day by day, as a youngster … you get used to the very high criteria that’s set (by his Jesuit teachers),” Fauci said.

At the White House ceremony laughter greeted President Bush’s description of Fauci’s only “flaw”: “Sometimes he forgets to stop working.” He said Fauci works 80 hours a week, and often receives notes from co-workers on his windshield, telling him to “go home.”

As head of the National Institute of Allergy and Infectious Diseases since 1984, Fauci has won numerous awards, addressed Congress and the United Nations on topics ranging from AIDS to allergies, and was “one of the architects” of the President’s Emergency Plan for AIDS Relief, President Bush said.

Fauci said his Jesuit training, and the lessons he learned at home, came in handy when activists from ACT UP – the AIDS Coalition to Unleash Power – protested outside his laboratories, accusing the institute of not doing enough to fight AIDS. Instead of having the protesters arrested, Fauci invited leaders inside and spoke with them.

“I think again as part of the training I had, not only from my Jesuit training but also my parents and my family … (what they taught me) was very much of the spirit of tolerance,” he said about how he handled the encounter. “My natural tendency to accept and be tolerant … was a combination of what I learned at home and what was fortified in my Jesuit training.”

“Your love and support have strengthened him as he works to save lives across the world,” the president told Fauci’s family.

Asked June 16 how the honor made him feel, Fauci said, “It’s really very humbling because you’re doing what you wanted to do, what you love to do, what you’re driven to do.”

Doing the work he does is “all part of the whole issue of service for others,” he said. “There are a lot of ways to serve people; taking care of their physical health needs happens to be the one” he said he is good at.