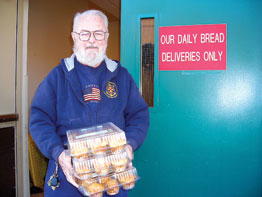 Brother Jim Horan, S.J., likens his vocation as a Jesuit brother to the ground crew of an airline fleet.

“People see the airplanes flying in the sky and recognize the pilots and flight attendants,” the 75-year-old brother said. “But, they often don’t think about the land crew. You know the people on the ground who maintain and fuel the planes. My vocation is kind of like that in the church. We’re the support team.”

Indeed, Brother Jim has spent his more than 50 years of ministry supporting his religious order, the church administrators and the programs it nurtures, and in the process he says his relationship with God has intensified.

After graduating from North Catholic High School in Philadelphia in 1950, the cradle Catholic wrestled with his attraction to religious life, contemplated marriage, worked as a carpenter’s apprentice and attended St. Joseph College for two years in the City of Brotherly Love.

In 1954 he took his vows of poverty, chastity and obedience as a Jesuit brother.

Over the years Brother Jim worked in food service, drove school buses, aided the dying in hospice care and helped those in need find the spiritual nourishment they required in Pennsylvania, the District of Columbia and Maryland.

Some of his most memorable jobs have been at Stella Maris and Loyola Blakefield, Towson, and though technically retired, he thrives in his work as a food delivery man at Catholic Charities’ Our Daily Bread soup kitchen and as a hospitality service member for seafarers at the Apostleship of the Sea in Dundalk.

As a parishioner of St. Vincent de Paul, Baltimore, Brother Jim said the pastor, Father Richard T. Lawrence, often serves as his spiritual mentor, and the diverse congregation keeps him in tune with many segments of society.

“I often think our lives are trial by error,” he said with a gleam in his eye consistent with his dry sense of humor. “This has been the best way for me to relate to God. I believe I have a blessed life.”