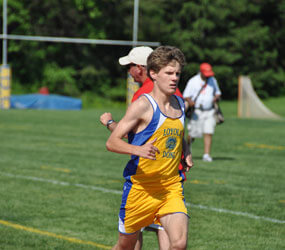 It didn’t take Matt Jablonski long to realize that being a dominant runner just might be in his DNA.

A two-time Maryland Interscholastic Athletic Association cross country champion and one of the nation’s premier prospects in the mile, the Loyola Blakefield senior said running was something he “kind of just got into” during his youth after watching his father compete.

“My dad has always been a runner and he’s a tri-athlete as well,” said Jablonski, whose mother also enjoys running. “I went to a couple of road races he had when I was younger and eventually I realized I might be a pretty good runner too.”

Last fall was the first in which he didn’t play soccer for the Dons.

“I always knew I was a better runner than I was a soccer player,” Jablonski said. “In order to get to my full potential while in high school I had to focus on running. It was a tough decision because soccer was my main sport for a long time.”

His focus narrowed, Jablonski had a remarkable month of April. In the span of three weeks, he finished second in the 3,200 meters at the Arcadia (Calif.) Invitational in 8 minutes, 50.59 seconds, and on April 29 won the mile in 4:10.37 at the Penn Relays in Philadelphia, the world’s largest annual track meet.

“It can be difficult performing at that level every time I race, but it’s something that I think I’ve worked pretty hard for,” Jablonski said.

He is considered the most accomplished prospect ever out of the MIAA. He’s headed to the University of Oregon, where the top miler is Matt Centrowitz. Jablonski looked up to him four years ago, when Centrowitz was at Broadneck High and setting state records.

According to Jablonski’s outdoor track coach, his success has been a long time in the making.

“He was extremely talented as a freshman, and he’s had an incredibly hard work ethic these four years,” Chris Cucuzzella said. “That’s why he’s where he is now – he’s one of the best high school milers in the nation. It’s invaluable to the program. The younger runners see how good he is, as well as how hard he works.”

Jablonski works just as hard in the classroom. He boasts a 3.5 GPA, while taking courses such as calculus, Introduction to Literary Criticism, Biotechnology and Forensics.

A parishioner of the Cathedral of Mary Our Queen in Homeland, Jablonski has volunteered at Beans and Bread, and has done service projects at Sarah’s Hope and Camp Umoja at Notre Dame Prep. He credits the Jesuit motto of being “men for others” as his motivation.