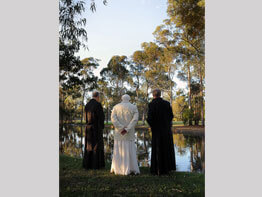 VATICAN CITY – Visiting Australia in July gave Pope Benedict XVI an opportunity to develop further his creation morality, which he first explained in the northern Italian Alps a year ago.

While Pope John Paul II was the outdoorsman, Pope Benedict’s three-year pontificate already is seen as the green papacy.

Accepting donations of solar panels and a reforestation project to offset the Vatican’s carbon footprint, the 81-year-old pope has shown his concern for the environment is concrete.

But his July 12-21 trip to Australia also gave him an opportunity to demonstrate that his concern is theologically based, part of a broad moral code and is perhaps the best way to convince young people that there is such a thing as natural law – that some actions are naturally always right or wrong.

Meeting priests in the Alps last year, the pope suggested that affirming young people’s sensitivity to environmental concerns was the first step in showing them that they really believe God created all things and that God’s plan for creation must be respected.

The next step, he said last year, was to explain that “we must not only care for the earth, but we must respect one another.”

“Only with absolute respect for this creature of God, this image of God which is man, only with respect for living together on this earth can we move forward,” the pope told the priests.

For Pope Benedict, the obligation to safeguard the environment flows from recognizing that God has a plan for creation as a whole and for all its components: air, water, mountains, forests, flora, fauna and – especially – human beings.

In Sydney for World Youth Day, the pope had an opportunity to explain to Catholic young people how it all fits together.

“God’s creation is good and it is one,” he said at the July 17 welcoming ceremony.

“The concerns for nonviolence, sustainable development, justice and peace and care for our environment are of vital importance for humanity,” he said. “They cannot, however, be understood apart from a profound reflection upon the innate dignity of every human life from conception to natural death: a dignity conferred by God himself.”

The earth and all it holds was created to sustain human life, he said, but neglect, greed and shortsightedness have led to the poisoning of air, water and soil and the destruction of the forests.

In a similar way, the pope said, people were created in God’s image and likeness and destined to seek truth, beauty and goodness.

But in the human environment, as in the rest of nature, there exists “a poison which threatens to corrode what is good, reshape who we are and distort the purpose for which we have been created,” he said.

Alcohol and drug abuse, violence, sexual degradation, abortion and other attacks on human life are all signs of how people ignore their own dignity or the dignity of others as the crown of God’s creation, the pope said.

And, he told the young people, relativism – thinking that there do not exist any absolute truths – is one of the clearest signs of a waning recognition that God is the creator of all things and all people.

Under the guise of being “neutral, impartial and inclusive of everyone,” relativism actually claims God’s place and denies that there is any such thing as natural order, natural purpose and natural goodness, he said.

The world is fragile, the pope told them, and harm done in one area affects another.

“We have become more and more aware of our need for humility before the delicate complexity of God’s world,” he said.

The pope’s message to the young people was that like the stars and the seas, the flowers and the cattle, “your very existence has been willed by God, blessed and given a purpose.”