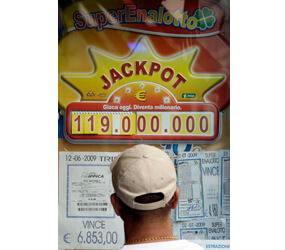 VATICAN CITY – As Italy’s national lottery jackpot reached a record level of $183 million, an Italian bishop warned that the gambling fever was a form of idolatry.

Through its SuperEnalotto game, the state has encouraged Italians to “trust their lives to fortune” and deceive themselves that a winning number will solve all their problems, Bishop Domenico Sigalini of Palestrina told Vatican Radio Aug. 10.

“It is not moral to continue to promote this kind of hope,” the bishop said.

The giant jackpot has prompted millions of Italians to buy tickets in the lottery, which pays the prize in one lump sum that is tax-free. The drawing is held three times a week, and the winner must hold all six correct numbers in a range of 1-90.

Bishop Sigalini said the hope of living off a lottery jackpot reflects the false idea of a God who “gives us everything when we don’t deserve it.”

“Clearly this is a form of idolatry, because we’re not turning toward God but toward money,” he said.

On a small scale, playing the lottery causes little harm to individuals or families, he said. But some players have invested heavily in the chase for the jackpot, to an extent that the game causes them to lose their sense of responsibility, he said.

In this sense, he said, the state has a responsibility not to whip up enthusiasm for the lottery, especially in the middle of an economic crisis.

Asked what advice he would give the eventual winner of the lottery, Bishop Sigalini said it would be wise to remember the fate of the many past winners who have “ended badly.”

“It’s a misfortune, not a fortune,” he said.

He said if a priest were the eventual winner, “he, like everyone, should have the great wisdom to share the money, which does not belong to us but to the people dying of hunger. It belongs to all those who need it to live!”