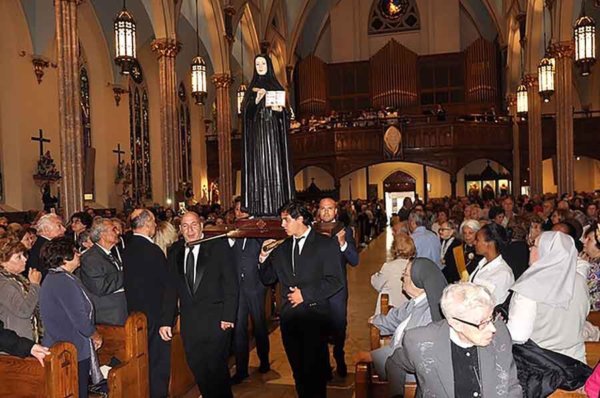 A statue of St. Frances Xavier Cabrini, who is the patroness of immigrants and once lived in Brooklyn, N.Y., is carried into Sacred Hearts-St. Stephen Church in Brooklyn Oct. 6, 2019. Calls for a statue of Mother Cabrini, as she is best known, began as part of the She Built NYC project, a public arts initiative that aims to increase the number of statues of women in New York City. (CNS photo/Ed Wilkson, The Tablet)

BROOKLYN, N.Y. (CNS) — The outrage over the snubbing of St. Frances Xavier Cabrini by New York City first lady Chirlane McCray’s She Built NYC commission culminated in a march and Mass Oct. 6 to support a public statue of Mother Cabrini, as the patron saint of immigrants is best known.

More than 1,000, including many Italian Americans, joined the march in Brooklyn’s Carroll Gardens section led by Bishop Nicholas DiMarzio of Brooklyn and Msgr. David Cassato, director of the Brooklyn Diocese’s Italian Apostolate.

The march showed support for Mother Cabrini after she wasn’t selected as one of first seven women to have a statue built in their honor by the She Built NYC project, an initiative that aims to increase the number of statues of women in New York City.

Mother Cabrini received the most nominations of any of the 320 women nominated, and yet she was passed over.

Jane Meyer, a spokeswoman for Mayor Bill de Blasio, said She Built NYC didn’t rely just on the number of public nominations. Instead, it took a “holistic” approach, she said, taking into consideration the advice of a 19-person committee that represented a diverse group of people with a broad range of expertise and backgrounds.

“There wasn’t one particular lever that was pulled more than another,” Meyer said. “Maybe it wasn’t clear along the way that it wasn’t the most vote gets it.”

Bishop DiMarzio said Mother Cabrini wouldn’t have asked for a statue herself, but noted a statue would honor the memory of immigrants and remind us of our responsibility to each other.

In his homily, delivered in English and Italian, the bishop said the saint has been his inspiration for more than 50 years — he keeps a small statue of her on his desk.

The image “reminds me every day of the missionary spirit with which she approached her work with migrants,” Bishop DiMarzio said, adding that he hopes “the same spirit continues to inspire me not only with my work with migrants, but also with the Diocese of Brooklyn entrusted to my care.”

In honoring “this great saint today,” he continued, “we recognize our responsibility to follow in her footsteps, so that the new immigrants in our midst — be they Italian and today most frequently they are not — but anyone who has left their homeland to find a home in the United States of America should find among we who are Catholics and honor Mother Cabrini willing hands of assistance and welcome, so that they too may breath the air of freedom and practice their faith in God without hindrance.”

He thanked the congregation for attending the Mass and encouraged them “to be devoted to Mother Cabrini. She followed Christ and we follow in her footsteps to assist those in need around us.”

Born in Italy, St. Frances Cabrini was the foundress of the Missionary Sisters of the Sacred Heart. Her dream was to go to China but at the insistence of Pope Leo XIII, who asked her to work among Italian immigrants in the United States, she left Italy for New York in 1889, accompanied by six sisters.

She established orphanages, schools and Columbus Hospital, and held adult classes in Christian doctrine. She received requests to open schools all over the world. She traveled to Europe, Central and South America and throughout the United States. She made 23 trans-Atlantic crossings and within 35 years established 67 houses with more than 1,500 sisters.

“This is a very emotional day for me because of that picture in my grandmother’s kitchen,” Msgr. Cassato said at the march. “I’ll never forget it.”

“(Mother Cabrini) committed her whole life to helping others, especially Italian Americans, and that’s something we need to remember and memorialize in a structure,” Deluna told The Tablet, newspaper of the Diocese of Brooklyn.

Fourteen sisters from Mother Cabrini’s order, the Missionary Sisters of the Sacred Heart of Jesus, were also in attendance at the march and Mass. Sister Maria Loretta Caeti held a relic of Mother Cabrini throughout the procession. She said she felt Mother Cabrini’s presence very clearly.

“I am so proud to be a daughter of Mother Cabrini,” Sister Caeti said. “I really am, especially of the way Mother Cabrini is honored today.”

According to organizers, the march and Mass drew the biggest crowd ever for an Italian Apostolate celebration.

Meanwhile, after the Mass, Msgr. Cassato announced that the Catholic Foundation for Brooklyn and Queens has started the Mother Cabrini Statue Fund. He said that has already raised $8,000 from four donors.

In September, Philip Foglia from the Italian American Legal Defense and Higher Education Fund wrote to McCray about the organization’s frustration with She Built NYC’s decision. He called it an “insult” to Italian Americans.

“Our organization is dismayed by the decision by ‘She Built NYC’ to preempt their own selection process and ignore Mother Cabrini, the clear choice of the public and most deserving person for such an honor,” his letter said.

McCray responded by saying in part: “With seven monuments planned so far, I am proud of the progress we are making; however, it will take many more years to correct centuries of neglect and the glaring gender and ethnic imbalance in our public space.”

Politicians have spoken out since the march to support Mother Cabrini. Like Foglia, they also called for an explanation for snubbing the saint and have asked decision-makers to reconsider.

This article was written by Andrew Pugliese, a reporter at The Tablet, newspaper of the Diocese of Brooklyn.