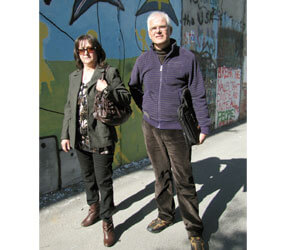 BETHLEHEM, West Bank – Sylvana Giacaman, 54, is giving herself a different kind of gift for Christmas: She is allowing her photo and a personal story to be posted on the Israeli separation wall.

On her poster Giacaman, a Catholic and the sole member of her immediate family who still resides in the Palestinian territories, shares a turning point in her life.

During the first intifada, she miscarried after being exposed to Israeli-fired tear gas A week later, while in Jerusalem for a medical exam, she saw an Israeli child playing on top of an escalator and about to fall.

“Thoughts rushed through my mind. Should I leave him and let him die the way the Israeli soldiers let my boy die a week ago, or should I make a desperate attempt to grab him? All of a sudden, I felt an impulse that made me hurry forward,” she said on her poster. “Throwing myself in front of the boy, I prevented his fall.”

This incident changed her whole life, she said.

“As a Christian I was about to take revenge (on the little boy), but then I realized what I must do as a Catholic and a Christian: to catch this baby with my own hands,” she said. “If somebody does something to us we mustn’t take revenge. We must take that opportunity to do better. After this happened, I realized I must love people even more and accept people the way they are … I must see in them the image of God.”

Giacaman’s poster is part of a unique open-air exhibition sponsored by the Sumud Story House, which stands just a few yards from the separation wall and one of its guard towers. The house was established in 2007 by the Pax Christi International-affiliated Arab Educational Institute as a center for awareness-raising activities locally and internationally. In Arabic, “sumud” means steadfastness, and the house’s activities are aimed at fostering persistence in staying on the land.

“These are all real stories of our lives,” said Giacaman. “I think that when people will read my stories and my sisters’ stories they will share in my suffering. They will realize that we Christian Palestinians are on this land.”

AEI development director Toine van Teeffelen, who is helping with the project, said the posters are meant to show the resilience of the women whose stories have usually gone unacknowledged.

“Groups who visit want to hear about the women’s lives, to hear from-the-heart stories about life here,” said van Teeffelen, who is originally from Holland and has made Bethlehem his home. “Women’s stories have not been acknowledged, certainly not in politics. We are hoping that at Christmas time when we celebrate the Prince of Peace, we will be able to bring new life in this area which has been deadened. We want this to be a statement of life rather than the predilection of the wall to kill (activities in the area.)”

Van Teeffelen said he is not sure how the Israeli soldiers will react to the posters, but they have not opposed all the anti-wall graffiti that local residents and international visitors have created.

Highlighting the women’s stories is “very important,” said van Teeffelen. In mid-December, the posters were just being erected, and the institute was looking for sponsors for more. He said when they have at least 50 posters, they will be able to have a full museum-like, official opening – sometime after Christmas.