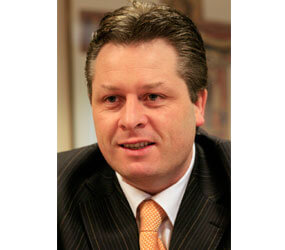 WASHINGTON – Talent-search contests didn’t start with “American Idol,” and Anthony Kearns, for one, is glad of that.

Kearns, the sole remaining original member of the Irish Tenors, won a contest on Irish radio 17 years ago called “Ireland’s Search for a Tenor.” It was sponsored by the Bank of Ireland, which was issuing a new 10-pound note, known in popular Irish parlance as a “tenner.”

During a Dec. 18 interview with Catholic News Service, Kearns recalled that the first audition had to be done over the telephone. “Can you imagine?” he said, shaking his head at the thought.

But Kearns passed the first test, and then the next test, and the one after that, until it came time for the finals in Dublin, three hours from his home, Kiltealy in County Wexford in southeastern Ireland. “I hitched a ride” to get to the finals, he said. He was the only finalist without any formal vocal training, yet he won despite the apparent handicap.

Kearns studied voice for six months after his win. He said his voice teacher told him, “If you’re really serious about this singing, you’ll move to Dublin.”

At that point, Kearns was growing disenchanted with his career. He had studied catering and hotel management and was working in the hospitality industry as a “singing barman.”

A Catholic, Kearns took a leap of faith, moved to Dublin, and good things started to happen quite soon. Although he had acted in musicals and Gilbert and Sullivan operettas back home, he was being cast for bigger roles on more important stages.

Then came the creation 11 years ago of the Irish Tenors. “We were modeled after the original (Three) Tenors, the big guys – (Jose) Carreras, (Placido) Domingo and (Luciano) Pavarotti. People kept thinking, ‘Everyone knows what an Irish tenor sounds like. Why don’t we do the same?’“ Kearns recalled.

Today Kearns, 38, sings with Finbar Wright and Karl Scully. With Kearns, the original trio included John McDermott and Ronan Tynan. McDermott left in 2000 after the death of his mother, and Tynan, who gained much exposure singing “God Bless America” at New York Yankees playoff games, left in 2004 to pursue a solo career.

“We wouldn’t be where we are without PBS,” which aired the first Irish Tenors concert special in 1999, Kearns told CNS. “But what really put us on the map was the Ellis Island concert” that aired on PBS in 2001, he added.

The Irish Tenors have since become of staple of PBS programming. They’ve stayed busy both on stage and in the recording studio. Their most recent CD is simply titled “Christmas.”

Kearns keeps busy even when the Irish Tenors aren’t working, as he continues singing solo performances; he had an engagement at the Capitol Club in Washington the day before his interview with CNS. “It was a bipartisan gathering,” he told CNS more than once. “It was a beautiful thing.” Kearns said, adding the audience seemed most moved with his rendition of “I Heard the Bells on Christmas Day.”

He also sings at his share of charity concerts. “Most of the charity concerts I do seem to be for a church and sometimes even at the church,” Kearns said, recalling one such concert for the restoration of an old church building. The pastor, whom Kearns said “looked like Jesus in a brown robe and sandals,” wept when the concerts proceeds were turned over to him at the end of the show.

Since Kearns’ ascent into fame and fortune Ireland has ditched the tenner and converted to the euro. But while the Irish tenners may be gone, the Irish Tenors thrive.