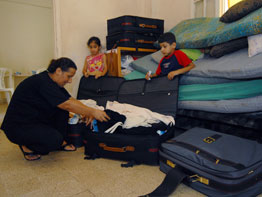 “When Chaldean Catholic Iraqi refugees arrive in Lebanon, the first place they come to is the bishop’s house asking for help,” said Chaldean Bishop Michel Kassarji of Beirut.

Each week, up to 10 and sometimes as many as 20 newly arrived Chaldean families come to St. Raphael the Archangel Chaldean Cathedral, across from the bishop’s residence, in a Beirut suburb. The numbers have increased in recent months, as the persecution of Christians in Iraq continues to escalate. The parish has a team of volunteers helping with the humanitarian crisis of the Iraqi Chaldean population in Lebanon.

To meet the demand and coordinate the needs of these refugees, the Caritas Lebanon Migrant Center in Beirut set up a satellite office in St. Raphael’s staffed with three Caritas social workers. Of its 35 social workers in Lebanon, Caritas has assigned at least 15 to work with Iraqi refugees.

“There is a persecution of Christians in Iraq. It is so obvious,” said Rania Chehab, a social worker who manages the Caritas office at the church. Caritas Lebanon is the local affiliate of Caritas Internationalis, the international umbrella group of Catholic aid agencies.

“Almost every family has experienced torturing, kidnapping or murder of a family member in Iraq,” said Ms. Chehab. “They are so traumatized.”

Since January, about 50 women whose husbands have either been kidnapped or killed have come to the office with their children.

Caritas social worker Maya Haddad said Iraqi refugees “are so friendly” and “only want to be heard and to be respected as human beings.”

Sometimes they come to the social workers just to tell their stories, she added.

“Just by talking about their problems, they feel some relief. But the most important thing they want is a future for their children, in a stable environment,” she said.

Isabelle Saade Feghali, coordinator of the Beirut office of the migrant center, said, “The children are suffering the most.”

“We are noticing that they need a lot of psychosocial support. Many saw their father, their uncle or someone assassinated before their eyes,” she said. “A solution should be found for the Iraqis because they cannot continue like this.”

The U.N. High Commissioner for Refugees estimates the total number of Iraqis in Lebanon at 50,000. Most refugees in Lebanon do not have legal status and are subject to arrest and detention. Their status as refugees is not recognized because Lebanon did not sign the 1951 Refugee Convention, which defines who is a refugee.

Lebanon, with a total population of approximately 3.5 million people, is also home to some 400,000 Palestinian refugees.

Approximately 400 Iraqi refugees living in Lebanon are scheduled to be resettled in the United States during September.