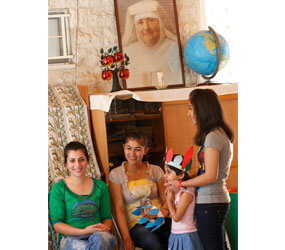 AMMAN, Jordan – Slwan Kehedeer Antoon was his own boss in Mosul, Iraq. He owned a liquor store and a car-rental agency.

Then, four years ago, Muslim hard-liners bombed his liquor store. Afterward, Antoon started driving his children to and from school because he felt he could not trust their safety to others.

Ultimately, Antoon, 46, a Chaldean Catholic, and his family fled to the safety and security of Jordan. They are refugees in every sense of the word, except by Jordan’s definition.

Jordan confers refugee status only upon Palestinians in their midst. It is now estimated that 60 percent of Jordan’s residents have some Palestinian ethnic background.

As for the Chaldean Iraqis? Even though they number 500,000 – more than 8 percent of Jordan’s 6 million population – it’s more like a matter of don’t ask, don’t tell.

Jordan considers them guests. The Jordanian-Iraqi border is open. But Antoon cannot reopen his liquor store or car-rental business in Amman, because Jordan forbids Iraqis who have fled their homeland to work. If they are caught working, they are subject to deportation back to Iraq because they committed a crime.

Although deportations are typically for such crimes as petty theft and prostitution, “most Iraqis don’t have access to work permits” in Jordan, said Elizabeth Campbell, a senior advocate for Refugees International, a Washington nonprofit. “You need a work permit to be working legally,” she added, noting that many Iraqis work in Jordan’s underground economy.

Iraqis in Jordan have six months to find another country to take them in. Antoon said he is paying the equivalent of a few dollars a day for each person in his family for the “privilege” of staying in Jordan but, without work, he has a hard time paying the fees. The Jordanian government does not charge such fees.

Until 2007, Iraqi children were not allowed to attend Jordanian schools; Jordanian education officials believed that their lack of schooling in a topsy-turvy Iraq would place them far behind their Jordanian counterparts. Campbell said she is sure that, even since 2007, there are “cases of discrimination” that have kept some Iraqi children from continuing their education in Jordan.

Because the Jordanian government does not recognize Iraqis as refugees and they cannot work to earn money, they have fewer chances to leave Jordan and join kin in the United States, Australia, Germany, or some other nation.

For Antoon, his wife and their three children, the four years in Jordan have hurt.

“This is a testing from God. This is what I believe,” Antoon said. Since he cannot work, he and his family go to church – a lot. After talking with a Catholic News Service reporter, they were planning to attend a Saturday evening Mass at a Jesuit-run parish in Amman, then go to another church the next day.

Antoon said he applied for help from the International Organization for Migration, which helps Jordan manage its large number of Iraqis, but the IOM “refused me and my family, and I don’t know what is the reason.”

“I make an appeal, and they refused again. They don’t tell me why,” Antoon told CNS in the chapel of Sacred Heart Church, founded in 2002 to provide pastoral care to Jordan’s Chaldean Catholics.

Antoon’s mother and brothers all successfully left Iraq and live in the Detroit suburbs; so do his wife’s parents and siblings. Because Antoon cannot work in Jordan, the family depends on gifts of money from Antoon’s mother, sent every few months or so, to help them get by.

There are other forms of help available to them.

The Franciscan Missionaries of Mary operate a help center for Iraqi refugees in Amman from their convent. They depend on church donations and private donors to provide assistance for the 160 or so Iraqis they see each week.

The five sisters’ help takes the form of food, counseling, schooling and religious instruction for the refugees’ children. In a safe country, the convent is a safe harbor for Iraqis to ponder their future.

Virtually all Iraqis visiting the center have kin living outside the Arab world. Many mention Detroit. Father Raymond Moussalli, the Chaldean vicar in Jordan for the Baghdad-based Chaldean Patriarchate, said there may be more Chaldeans living in the Detroit area than in the Iraqi capital of Baghdad.