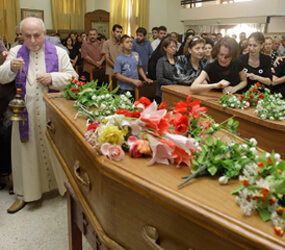 BEIRUT, Lebanon – Chaldean Auxiliary Bishop Shlemon Warduni of Baghdad, Iraq, had just finished celebrating Mass at Our Lady of the Sacred Heart Church and was talking to parishioners in the courtyard. Moments later, while he was in his office, a bomb exploded on the road that runs alongside the church.

The July 12 bomb blast was one of six that targeted Christian churches in Baghdad July 11-12; another church was bombed in the northern city of Mosul July 13.

Contrasting the Mass with the mayhem that ensued, Bishop Warduni told Catholic News Service in a telephone interview, “We had been praying for peace during the Mass.”

He said that “all the little children (had been) praying in the church. Then they ran outside to see the death, the destruction, to see the war.”

“We cry: Why? Why? What is our fault? That we are Christians?” the bishop said.

The series of church bombings left at least four dead and more than 30 injured. A flare-up in violence last October claimed the lives of 13 Christians and forced thousands to flee Mosul.

“All the Christians are leaving,” Bishop Warduni told CNS July 13. Iraq’s Christian population has dwindled to approximately half of what it was before the 2003 U.S.-led invasion.

He said the attacks were part of a plan to purge Iraq of Christians and added: “We need peace. We need security.”

The bishop said he did not know who the perpetrators were, but added, “If I knew who it was, we would pray for them.”

The bishop asked the world to pray for Iraq.

“Prayer unites us as brothers,” he said. “We don’t have any weapon but prayer. With prayer, we can kill the war.”

The Vatican newspaper, L’Osservatore Romano, reported July 13 that Cardinal Tarcisio Bertone, Vatican secretary of state, sent a telegram to the Chaldean patriarch, Cardinal Emmanuel-Karim Delly of Baghdad, assuring him of Pope Benedict XVI’s prayers for the Catholic community in Iraq. The pope “prays for the conversion of the hearts of those responsible for the violence and encourages the authorities to do everything possible to promote a just and peaceful coexistence among all sectors of the Iraqi population,” it said.

Younadem Kana, an Iraqi Christian lawmaker, told The Associated Press: “The terrorists are determined to hamper the political process in Iraq and not let Iraqis live in peace even after the withdrawal of foreign forces from the cities. … We demand that the Iraqi government take all necessary measures to protect Christians in Baghdad and in all of Iraq.”

The attacks occurred less than two weeks after the pullback of U.S. troops from Iraqi urban areas.

Iraqi officials announced July 13 they were stepping up security around all Christian places of worship.

In Washington, the U.S. Commission on International Religious Freedom, a watchdog agency, expressed alarm at the bombings.

A July 13 statement quoted commission chairman Leonard Leo as saying the Iraqi government “must apprehend and punish the perpetrators of this violence and must ensure that civilian property and lives, particularly of its most vulnerable citizens, are protected.”

The commission said Iraq’s small Christian community has been particularly vulnerable to violence because it does not have militia or tribal structures to protect itself and does not receive adequate official protection.