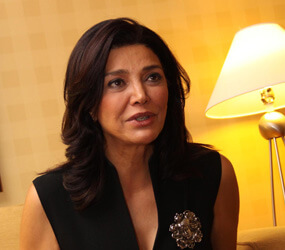 PHILADELPHIA – When Iranian-born actress Shohreh Aghdashloo was asked by co-director Cyrus Nowrasteh to consider the lead role in the movie “The Stoning of Soraya M.,” her immediate reaction was, “I’ve been waiting for this for 20 years.”

The film, which is being released June 26, is based on the barbaric 1986 execution of an Iranian mother on false charges of adultery orchestrated by a cruel husband intent on marrying a young girl and assisted by a corrupt mullah. The two whip the men of the village into a frenzy resulting in the graphically depicted execution.

The stoning scene is certainly graphic, but Aghdashloo noted, “It only lasts six minutes. I have seen a tape of a real stoning and it took an hour and a half.”

Aghdashloo plays Zahra, the victim’s courageous aunt who, in a relentless pursuit of justice, gives an account of the case to a French-Iranian journalist, Freidoune Sahebjam (Jim Caviezel, who portrayed Jesus in “The Passion of the Christ”). The journalist wrote a best-selling book of the same title as the movie.

“This film will forever be close to my heart; I had no hesitation, none whatsoever, to do it,” said Aghdashloo, whose own feeling on the state of the oppression of women in her native country is summed up by Zahra’s words near the beginning, “The voices of women do not matter here.”

The huge demonstrations against what has been viewed as a rigged presidential election in Iran have changed Aghdashloo’s perception of “The Stoning of Soraya M.”

Up until the June 12 election and the ensuing protests, “my focus was on a voiceless woman being stoned. Now it is about the woman who stands up for her rights,” she told The Catholic Standard & Times, Philadelphia’s archdiocesan newspaper, while in town to promote the movie.

“The irony is amazing, how timely and timeless the film is. It has a woman speaking to a reporter. Now in Iran women are standing up and telling reporters what is going on,” she said. “There are hundreds of thousands protesting, and 40 percent of them are women.”

“The Stoning of Soraya M.” received a classification of L – limited adult audience, films whose problematic content many adults would find troubling – from the U.S. bishops’ Office for Film & Broadcasting for “a sequence of intense violence, torture, sexual references and one rough and a few crude and crass terms.”

Aghdashloo began as a successful actress in pre-revolution Iran. With the rise of the Islamic state and harsh religious guidelines, her films were either censored or forbidden.

She fled Iran for London, where she earned a degree in international law with the intent of first entering journalism, then politics. But just at that time a friend offered her a part in a play about the Iranian revolution, and a second film career started. It led to work in Hollywood where, after a stunning performance in the 2003 film “The House of Sand and Fog,” she was nominated for an Oscar for best-supporting actress.

Other film credits have included “The Exorcism of Emily Rose,” “American Dreamz,” “X-Men: The Last Stand” and “Nativity Story,” in which she played Elizabeth.

A special memory of the latter was a screening before a large audience at the Vatican, after which the cast members present had dinner with then-Archbishop John Foley, now a cardinal, who surprised her by his knowledge and discriminating insights into fine cinema.

A small regret she has is that she did not come to America as a very young actress, when mastering English without an accent would have been easier and more roles would have come her way.

She has gradually come to realize her appearance in meaningful films that protest injustices really does more good for the promotion of human rights than she could have done as a journalist.

Although Aghdashloo jumped at the chance to appear in “The Stoning of Soraya M.,” several actors turned down the journalist’s character before Caviezel accepted. They were afraid of possible retribution against their families for appearing in a film that might be seen as critical of radical Islam.

Aghdashloo has had threats made against her life because of her work, she acknowledged, but that will not deter her.

“It’s not about my safety, my image, at the end of the day. There are 10 people in Iran on death row waiting to be stoned. When I think about one woman waiting there, I would rather go with her than with my safety.

“None of this happened in the old regime under the shah. We have been drawn back 1,500 years,” she said. “Women had rights under the shah. This isn’t Islam; it is superstition and tradition.”

Will conditions change in Iran?

“I’m naturally an optimistic person and happy with small things,” Aghdashloo said. “I sincerely believe people will choose peace over violence. Iran is at the dawn of democracy.”